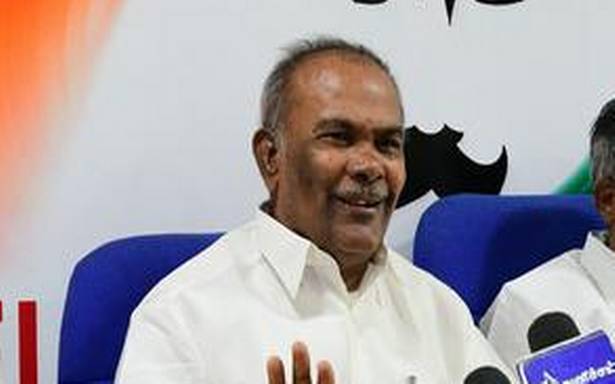 Former Radhapuram MLA M. Appavu has categorically denied Fisheries Minister D. Jayakumar’s allegation that he had close ties with one of the persons arrested in connection with the Tamil Nadu Public Service Commission recruitment scam.

After the CB-CID police, who are probing the TNPSC Group IV and Group II A recruitment scam, arrested hairdresser Ayyappan from Ramachandrapuram near Vijayapathi under Koodankulam police station limits, who has also passed in the Group IV exam, Mr. Jayakumar had told the reporters that Mr. Appavu had close links with Ayyappan and showed a photo of the two that went viral on social media to reiterate his charge.

Denying it stoutly, Mr. Appavu, while addressing the media here on Wednesday, said the CB-CID probing this scam should be given freehand in the investigation which should be monitored by a sitting Judge of the Madras High Court.

Moreover, all examinations being conducted by the TNPSC should also be conducted under his supervision to weed-out “murky deals” now getting unearthed everyday from every nook and corner of Tamil Nadu.

“I am in public life for 24 years and had been the MLA for 15 years. I have always raised my voice against irregularities and scams and never been part of anything unethical and unlawful. Since I am in public life, I attend all auspicious functions and unfortunate incidents in my constituency [Radhapuram]. During one of these functions, the said Ayyappan might have taken a photo with me which does not mean that he is my supporter,” Mr. Appavu clarified.

While accusing the Ministers of Tamil Nadu, including Mr. Jayakumar, of indulging in corruption of all sorts, Mr. Appavu said sitting MLA of Radhapuram I.S. Inbadurai was spearheading the malicious campaign against him.

He said Mr. Jayakumar, in a bid to portray him as innocent, had indulged in mudslinging against DMK president M.K. Stalin and his son Udhayanidhi Stalin.

Mr. Inbadurai, who met reporters in the evening in a hastily arranged press conference, said Ayyappan, who did election work at Padalaiyarkulam along with Mr. Appavu in the recently held Nanguneri by-poll, had sought ticket in the DMK to contest in the Radhapuram union council election as he had held the party post of Radhapuram union students’ wing deputy organiser.

“Since Ayyappan had close association with Mr. Appavu, the CB-CID should question the former MLA also in connection with the TNPSC recruitment scam. If not, I will approach the court seeking direction to the investigating agency to grill Mr. Appavu,” Mr. Inbadurai said.