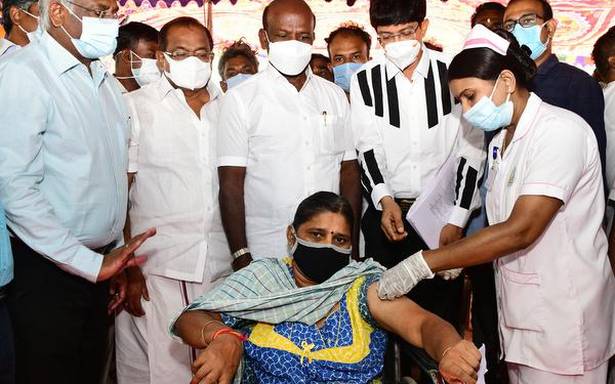 Health Minister Ma. Subramanian said the rationale behind exploring the possibility was that private hospitals were not using the vaccines allotted to them fully

The Minister planned to hold a meeting with representatives of private hospitals that are empanelled under the Chief Minister’s Comprehensive Health Insurance Scheme, as well as with various companies and institutions in Coimbatore.

According to the Minister, the rationale behind exploring the possibility was that private hospitals were not using the vaccines allotted to them fully. “While 75 % vaccines manufactured in the country are procured by the Union Government, 25% of vaccines are [earmarked] for private hospitals. However, private hospitals are not using their total allotment fully. Funds from private firms and institutions were used for buying equipment and improving facilities in hospitals when the State was reeling under COVID-19. With the COVID-19 situation eased, the government is exploring possibilities of using CSR funds for free vaccinations through private hospitals," said Mr. Subramanian at Walayar on the Tamil Nadu-Kerala border, after inspecting the interstate check post along with Minister for Food and Civil Supplies R. Sakkarapani.

If the plan works out, Tamil Nadu would be the first State to implement the initiative in the country, he said.

Responding to allegations that DMK cadre were interfering in vaccination drives, Mr. Subramanian said the government would not allow such happenings.

The Ministers advised residents to not allow clogging of water, which leads to mosquito breeding.

Earlier, the two Ministers and officials inspected a vaccination drive held for persons with disabilities and their dependents at Chinniyampalayam.