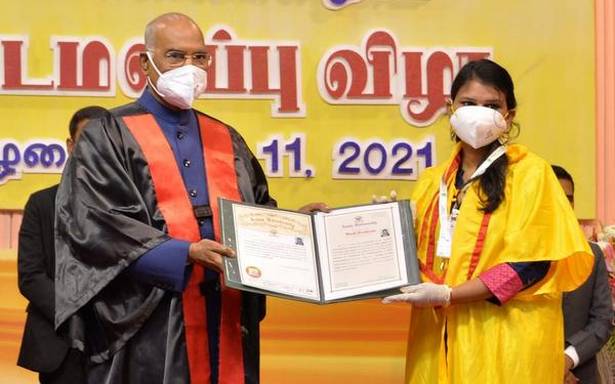 President Ram Nath Kovind heaped rich praise on the State and on Anna University in his convocation address on Thursday.

Mr. Kovind surprised students and faculty by starting his speech in Tamil. He greeted the students on their achievements. Anna University is blessed to be in Tamil Nadu “which has been the cradle of knowledge and learning since times immemorial. The long literary tradition spanning over centuries in the form of Sangam literature is a matter of pride for all Indians, as it symbolises the rich cultural heritage of our country,” he said.

Education is the catalyst for change and youth are “the most potent agent of social transformation,” he said.

The National Education Policy 2020 aimed to educate youth who would be able to bring revolutionary changes, he said. The Policy sought to implement a modern education system based on research, skill and acumen relevant to the evolving needs of the present. It would also include within its domain our rich cultural heritage in consonance with a futuristic outlook. It focused on inculcating moral values and promoting understanding of Indian culture, he said.

Mr. Kovind, who distributed the gold medals to students who had scored the first rank in various programmes, said he was pleased to learn that 60% of the total students who received gold medals and first class degrees were women. “This excellence displayed by women is a reflection of the future of India as a developed nation,” he said.

University Vice Chancellor M.K. Surappa, who presented the annual report, said it was the first technical institution in the country to conduct examinations in the digital mode for over 1.2 lakh students in more than 1,000 different subjects. The University had recently concluded the first semester and arrear exams online for over 4.5 lakh students.

As many as 1,04,075 candidates graduated on Thursday, the V-C said. Of this 69, including 42 women graduands, had received the first rank.

The Department of Science and Technology had selected Anna University for a possible 100 crore grant under the National Mission on Interdisciplinary Cyber Physical Systems jointly with the Indian Institute of Technology, Tirupati.

03/11/2021 India Comments Off on TN has been cradle of learning since times immemorial, President says
India