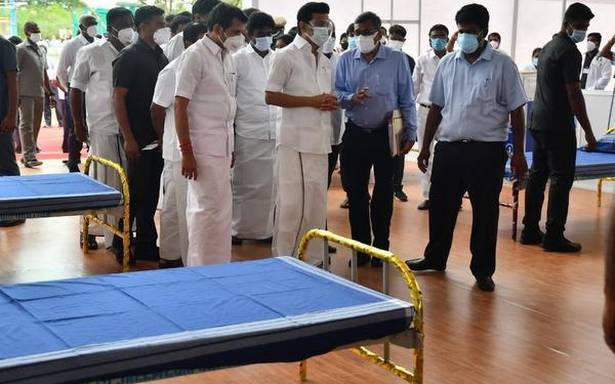 The treatment centre, near the Salem Steel Plant, will have medical oxygen support for all beds, officials said

Mr. Stalin interacted with healthcare workers deployed at the centre and enquired about their well-being. He spoke with Health Department officials and took stock of COVID-19 situation in the district. Mr. Stalin also received contributions for the Chief Minister’s Public Relief Fund here.

While returning, Mr. Stalin stopped and received petitions from the public and distributed masks and sanitisers to them.

The 500-bed facility is being readied jointly by the district administration, Salem Steel Plant, JSW industries and other service organisations. According to officials, the medical oxygen supply to the facility is drawn in pipeline from the oxygen plant set up at the Steel Plant and all 500 beds would have medical oxygen support. Each bed has been provided with a separate cabin. Officials are considering increasing the bed strength as well.

Earlier at the airport, Mr. Stalin presented a book to a young woman S. Ilayarani from Selanaikenpatti who recently helped an elderly woman who fainted on the road to reach the hospital.