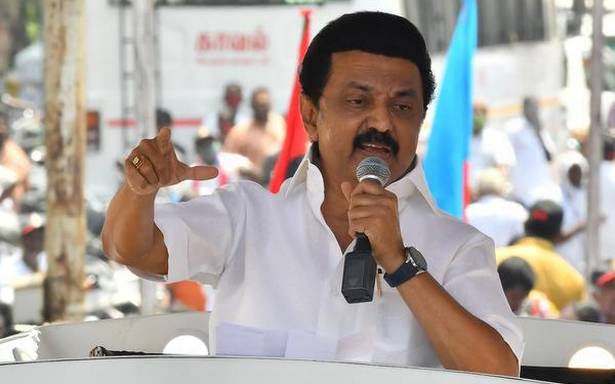 The DMK president, in a letter, said real motivation has to come from hard work and not from predictions of opinion polls

DMK president M.K. Stalin has told party cadres not to become complacent in the wake of opinion polls predicting a victory for the DMK-led alliance in the upcoming Assembly poll on April 6.

In a letter to party cadres, he reminded them that the margin of defeat in the last Assembly poll was only 1.1% due to which the then DMK president M. Karunanidhi could not become CM for the sixth time.

“It is due to the lackdaisical attitude in some constituencies in the last elections that Tamil Nadu’s governance fell into the hands of slaves and is still suffering. Hence, the real motivation has to come from hard work through which every vote will be cast for our party and not from predictions of the opinion polls,” Mr. Stalin said.

The DMK president said those who had lost out on the party’s ticket to contest the poll will be given the right opportunity at the right time. “Those who have been fielded for the poll are also your fellow cadres and we should all work with the belief that Kalaignar [late Mr. Karunanidhi] is the candidate in every constituency,” Mr. Stalin said.

He also said the party cadres must consider alliance parties who are contesting on their own symbols or on the DMK symbol, as DMK’s own candidates and must work with the singular vision of ensuring their victory. “In fact, we need to have even more coordination and unity in work in those seats to ensure our alliance partners’ victory,” he said.