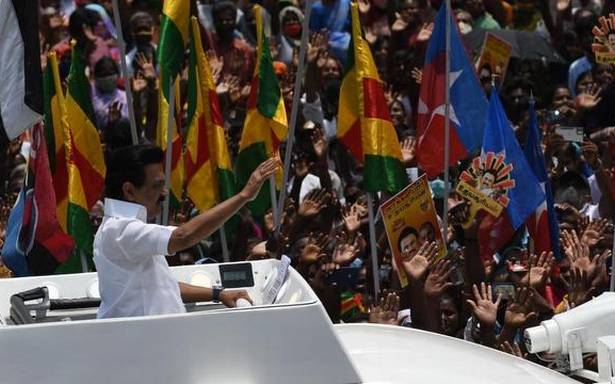 The DMK president asked the TN CM to ask PM Modi about the withdrawal of NEET, the payment of debt relief package dues and about the Centre’s opposition in court to the 7.5% reservation in medical seats

DMK president M.K. Stalin, while campaigning in Mettupalayam on Thursday challenged Chief Minister Edappadi K. Palaniswami to pose a set of questions to Prime Minister Narendra Modi when they share the dais in Madurai on Friday.

Mr. Stalin challenged Mr. Palaniswami to ask the following questions to or speak with conviction before Mr. Modi – on the withdrawal of the anti-minority Citizenship Amendment Act as the AIADMK, after supporting the Bill in Parliament, has now opposed it in its manifesto, on withdrawing NEET and the three farm laws, on the demand to release the seven convicts in the Rajiv Gandhi assassination case, on paying the remaining debt relief package that the State had asked for after natural calamities, on asking why India abstained from voting in the United Nations Human Rights Council and why the Centre had opposed in court, the 7.5% reservation in medical seats.

“Even if Mr. Palaniswami does not have the courage to stand upright to ask the questions, let him genuflect or crawl, but still ask the questions because the interest of the State is paramount,” Mr. Stalin said. Likewise, he should also appeal to Mr. Modi to go around the site chosen for building the All India Institute of Medical Sciences in Madurai, to check how much progress has been made.

In Mettupalayam and Kavundampalayam, where Mr. Stalin campaigned for the Secular Progressive Alliance candidates contesting from Kavundampalayam, Coimbatore North, Coimbatore South and Singanallur Assembly constituencies, Mr. Stalin said many poll pundits were commenting that there was no wave in this election. “There is not just a wave: a tsunami is coming. The DMK-led alliance will sweep all the 234 seats,” the DMK president said and added that when he started campaigning a few weeks ago, he thought the DMK would win around 200 seats but now it appeared to be a clean sweep. The Opposite camp would get washed out. And, it was important that not just the BJP was defeated but the AIADMK as well because on winning, the AIADMK MLAs would start functioning as BJP MLAs as it had happened with Theni MP O.P. Raveendranath Kumar after the 2019 Parliament elections, he said.

Mr. Stalin said it was important that the DMK alliance won all the seats in the Kongu belt to shatter the notion that this region was an AIADMK strong hold. “In the 2019 Parliament election, the DMK had dented that image. Now it was time to completely destroy that notion,” he said.

Taking on Uttar Pradesh Chief Minister Yogi Adityanath, who campaigned in Coimbatore on Wednesday, Mr. Stalin said it was unfair of the Uttar Pradesh CM to say that women would start feeling unsafe under the DMK regime because TN was far ahead of UP on several indicators.