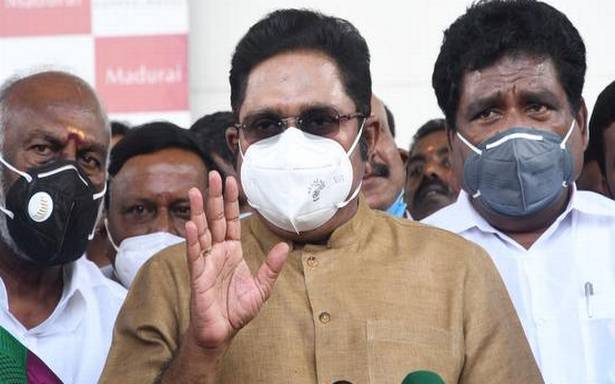 Dhinakaran released the second list of party candidates for 50 constituencies including his candidature.

Amma Makkal Munnetra Kazhagam (AMMK) founder TTV Dhinakaran will contest against Information Minister Kadambur C Raju in Kovilpatti Assembly constituency in Thoothukudi district. The DMK is yet to come out with its list of nominees. Mr Dhinakaran is a sitting MLA from Dr Radhakrishnan Nagar constituency in Chennai.

Mr Dhinakaran on Thursday released the second list of party candidates for 50 constituencies including his candidature. On Wednesday, the first list was out with 15 names. So far, the party has given tickets to five women candidates.

As of now, the party struck electoral pacts with six parties for 13 constituencies. The Social Democratic Party of India (SDPI) had been given six seats – Alandur, Ambur, Tiruchi (West), Thiruvarur, Madurai (Central) and Palayamkottai. Apart from distributing three seats for the All India Majlis-e-Ittehad-ul-Muslimeen (AIMIM), the AMMK gave one seat each to four other parties – Makkalarasu Katchi, Viduthalai Tamil Puligal, Gokula Makkal Katchi and Marudhu Sena Sangam.

The AMMK leader had gone on record, stating that he would contest from two constituencies, one of which would be from the Theni district. In the second list, the AMMK announced candidates for Bodinayackanur and Andipatti. This leaves only one constituency, Cumbum, left for him as Periyakulam is a constituency reserved for Scheduled Castes.

An important feature of the second list was the inclusion of sitting AIADMK legislator M.S. R. Rajavarman for Sattur who joined the party earlier in the day. On Wednesday, the ruling party, while releasing its list of candidates, did not renominate Mr Rajavarman, who got elected in a by-election from the same constituency on the AIADMK symbol in April-May 2019.

As in the first list, the second list of the AMMK too contained four more former legislators, who were disqualified by Assembly Speaker P. Dhanapal in September 2017. They were C. Jayanthi Padmanabhan (Gudiyatham), M. Kothandapani ( Thiruporur), S. Mariappan Kennedy (Manamadurai) and T.A. Elumalai (Poonnamallee). In the first list, the other four disqualified legislators who got the party tickets were P Palaniappan (Pappireddipatti), M. Rengasamy (Papanasam), N G Parthiban (Sholinghur) and R R Murugan (Harur).