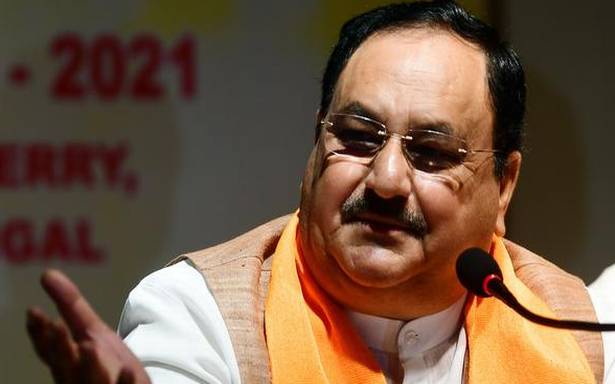 On ally AIADMK’s manifesto stating that it would urge for withdrawal of CAA, he said that they will work together on the issue.

BJP national president J.P. Nadda on Sunday said that construction of All India Institute of Medical Sciences (AIIMS) in Madurai was delayed due to issues relating to design of the building, soil testing and issues relating to land, but it will come up soon.

He was addressing a press conference in Chennai on the last day of election campaign before the Assembly polls in Tamil Nadu and Puducherry.

Responding to a question on DMK youth wing leader Udhayanidhi Stalin recent campaign holding a brick to stress that there was no progress in construction, Mr. Nadda said the proposal of construction of AIIMS came up when he was the Union Health Minister.

“Since I was a Health Minister, I take full responsibility. It is a big project with a cost of over ₹11,00 crore and with 750 beds. Delays might come in the form of land, building and getting all types of clearances,” he said.

“On DMK’s charge that the recent IT searches were politically motivated,” Mr. Nadda said that they were done according to norms and based on information received by the department.

“These departments work on their own. They (DMK) are trying to politicise the issue unnecessarily. All I would say is honesty is the best policy, remain clean and remain safe,” he said.

To a question on DMK president M K Stalin’s statement that he would not allow implementation of Citizenship Amendment Act (CAA) if his party comes to power, Mr. Nadda pointed out it is a Central legislation passed by the parliament and the state legislation or state government cannot bypass it.

On ally AIADMK’s manifesto stating that it would urge for withdrawal of CAA, he said that they will work together on the issue.

“In Kerala we will be a force to reckon with,” Mr. Nadda added.

04/04/2021 India Comments Off on TN Assembly polls | AIIMS in Madurai was delayed due to land and other issues, says Nadda
India