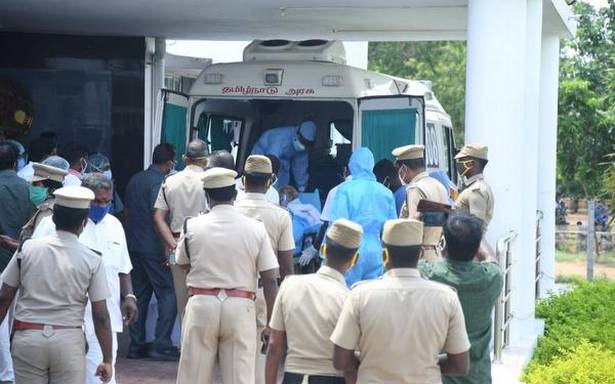 The Minister was on his way to Salem when he was admitted to the Villupuram government hospital, from where he was shifted in an ambulance to Chennai

Tamil Nadu Agriculture Minister R. Duraikannu, 72, was admitted to the Villupuram Government Medical College and Hospital (VGMCH) in Mundiyambakkam on Tuesday morning with complaints of chest pain. Later in the morning, he was taken in ambulance from the hospital to Chennai.

Sources said that Mr. Duraikannu was brought to the VGMCH at around 11 a.m. and was stable. He was admitted to the Emergency Ward and was looked after by a team of doctors.

The Minister was going from Chennai to Salem to pay homage to Chief Minister Edappadi K. Palaniswami’s mother who passed away at a private hospital in Salem early on Tuesday.

When the Minister’s convoy reached Vikravandi en-route to Salem, he complained of uneasiness and chest pain and was immediately rushed to the VGMCH.

A senior doctor in VGMCH said that he was admitted for a cardiac problem. His condition was stable, and an ambulance has now taken him to Chennai.