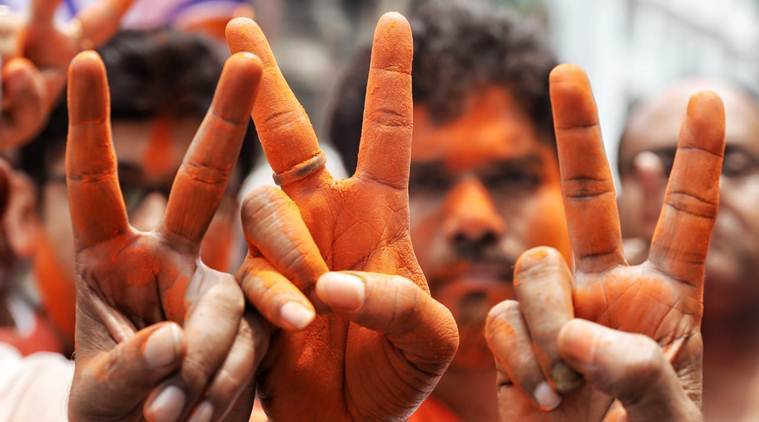 If the trends stay until final results, the BJP would have improved on its 2014 performance when it had won 282 seats on its own in the 543-member Lok Sabha. Adding the seats won by its allies, the BJP-led National Democratic Alliance could win 343 seats, up from 336 in 2014. 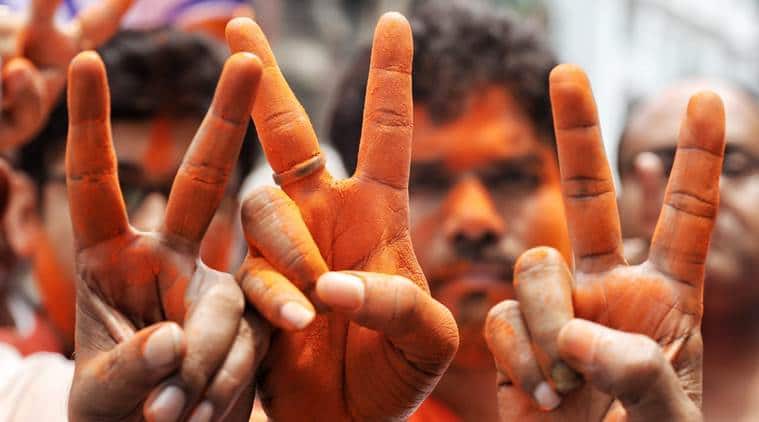 With the BJP set to claim a consecutive second term at the Centre, leaders across the political sphere congratulated the saffron party for its victory. As celebrations broke out across the BJP’s headquarters on Thursday with the party leading in 294 seats, senior ministers and alliance partners hailed Prime Minister Narendra Modi for the victory described by many as a tsunami.

West Bengal Chief Minister Mamata Banerjee congratulated the winners, adding that “all losers are not losers.” Taking to Twitter, Mamata sought for a complete review of the results before sharing her views on the trends.

“Congratulations to the winners. But all losers are not losers. We have to do a complete review and then we will share our views with you all. Let the counting process be completed fully and the VVPATs matched,” she said.

“So the exit polls were correct. All that’s left is to congratulate the BJP & NDA for a stellar performance,” Abdullah tweeted. “Credit where credit is due PM Modi Sahib and Mr. Amit Shah put together a winning alliance & a very professional campaign. Bring on the next five years,” he added.

PDP chief Mehbooba Mufti said it was time for the Congress “to get an Amit Shah”.

Mufti also conceded defeat after coming in third from the Anantnag constituency in Jammu and Kashmir.

Within the party, senior ministers Sushma Swaraj, Suresh Prabhu and Ramvilas Paswan credited Modi with being at the centre of the electoral victory. “It was not an election but Modi tsunami. I heartily congratulate Narendra Modi,” Consumer Affairs Minister and Lok Janshakti Party Ram Vilas Paswan said in a tweet.

Suresh Prabhu likened the imminent win to a tsunami.

“It’s nothing short of a landslide, a political tsunami sweeping entire country, east or west, BJP is the best, is a reality. North to south people have voted for a clear, unambiguous choice… country must progress further under the leadership of Narendra Modi… ,” Prabhu said in tweet.

Information and Broadcasting (I&B) minister Rajayavardhan Singh Rathore, who is leading in his constituency of Jaipur Rural, said, “My salute to the untiring workers of BJP and Jaipur rural, this is their service to the nation.”

The Aam Aadmi Party also congratulated the BJP after conceding defeat in Delhi. “In democracy, mandate of the people is considered to be very powerful. We respect the mandate of India and congratulate the BJP for its victory. We offer Prime Minister Narendra Modi best wishes for his future tenure. We hope he would do good work in his future tenure,” Aam Aadmi Party spokesperson Saurabh Bharwaj said.

If the trends stay until final results, the BJP would have improved on its 2014 performance when it had won 282 seats on its own in the 543-member Lok Sabha. Adding the seats won by its allies, the BJP-led National Democratic Alliance could win 343 seats, up from 336 in 2014. Markets cheered the trends, as the benchmark BSE Sensex touched 40,000 for the first time and NSE Nifty breached the 12,000 level. The rupee appreciated 14 paise to 69.51 against the US dollar trade.

05/23/2019 India Comments Off on Time for Congress to get an Amit Shah, says Mehbooba Mufti; who said what on Lok Sabha results
India