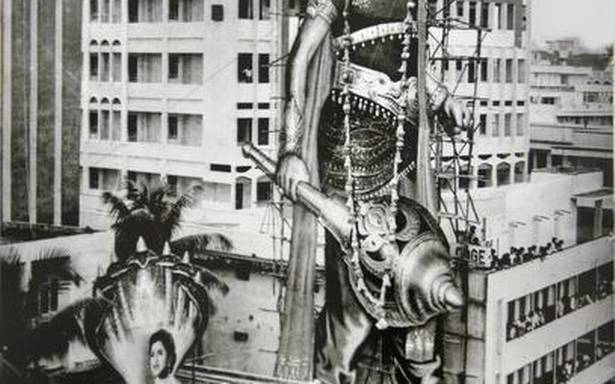 Prakash N.S., who grew up in the Majestic area and saw it undergo several transformations over six decades, remembers a time when it was “truly majestic and not the chaotic hub it is today”. The beating heart of the city was not just a transport and business hub, but a cultural centre with professional theatre companies such as Hirannaiah Mitra Mandali and many cricket clubs.

“The way Majestic has transformed — from a lake to what it is today — is unique. This transformation, especially in the past decade, has been drastic, both in scale and manner. Two decades ago, there were some 18 theatres, now there are less than 10. Recently, the famous Kapali Theatre gave way to a new construction, and a multiplex is coming up on K.G. Road, opposite Santosh Theatre,” Mr. Prakash said.

While the Majestic of the 1960s is fading, the area has only grown in importance as a transportation hub: today it is home to the Bangalore Metropolitan Transport Corporation and Karnataka State Road Transport Corporation bus stands, the Krantivira Sangolli Rayanna or City railway station, and a metro interchange station.

Lodges, hotels, theatres, travel agencies, and other businesses have cropped up almost organically, responding to the needs of citizens. The areas surrounding Majestic have wholesale and retail markets of garments, textiles, stainless steel, electrical, electronics, jewellery, and stationery.

Sajjan Raj Mehta of Jain International Trade Organisation, which has offices in the area, attributed this change to the fact that Mamulpet, Chickpet, Balepet, and tens of “petes” are adjacent to the Majestic area. Any transformation in one place will have an impact on the other. The construction of a metro station has been a major boost for the around 17,000 traders in the Majestic and Chickpet areas,” he said.

Small businesses, however, are unhappy with construction in the area, which they say has affected the informal sector. “We are made to shift every now and then. I used to have a stall where the present metro station now stands,” said Mohammed Afshan, who sells fruits and juice in the summer and clothes and belts during the winter months.

Another small trader, Rudresh, has learned to evolve with the changing face of Majestic. “I used to sell toys, but then I saw there was demand for phones and chargers, so I switched. But the number of people who stop to buy products has reduced in the last few years,” he said, blaming the “continuous construction activity” for this.

Despite the fact that lakhs of people use Majestic daily, businesses say that there has been a drop in demand. The consensus is that some people just pass through now.

Arun Kumar B.S, owner of Santosh Theatre, said, “Bengaluru has grown with each area having its own entertainment facilities, parks, malls, and theatres. The number of people coming to Majestic for entertainment alone has dropped. However, since there always was and will be a floating population in the area, we still have good hotels, restaurants, theatres, and a number of shopping complexes and travel agencies,” he said.

Traffic congestion is another problem. “Majestic and surrounding areas are crippled by frequent traffic jams, waterlogging during rains, shrinking space for roads, and lack of parking facilities. This has had repercussions on business around the place, especially in the informal sector,” said Nitin Shah, MD of Sapna Book House.

To keep up with the times, the landmark bookstore, which is one of the largest in the country, has also evolved. When it was started in 1967, Sapna sold only books. “Now we have 20 verticals, including gift items and stationery. The demography around Majestic has changed with the change in the nature of business, so we had to adapt,” Mr. Shah said.

Majestic has always had a floating population. As one trader pointed out, “This is Majestic. There will always be room for good hotels, restaurants, theatres shopping complexes and travel agencies here.”

06/01/2019 India Comments Off on Through majesty and chaos, change is the only constant at Majestic
India