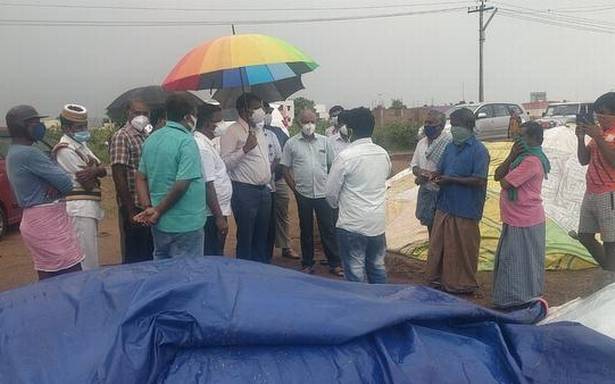 With harvesting of paddy on around 3,000 hectares under way in and around Rajapalayam, the Department of Agriculture has opened three direct purchase centres (DPCs) in the block.

“With good rainfall reported in the last three months, the farmers had gone for paddy cultivation in an additional 1,000 ha,” said Agricultural Officer G. Dhanalakshmi.

Harvesting has been going on for the last 10 days and the DPCs have come up in Rajapalayam, Seithur and Devadanam.

Rajapalayam block has a good irrigation system which drains the entire rain water coming from the Western Ghats through Sivalaperiyar, Nagariyar and Deviyar into 105 system tanks.

“As water filled up all the tanks there was ample storage for farmers to expand the coverage area,” she added. Paddy was grown in Seithur, Devadanam, Koviloor, Rajapalayam, North Venganallur and Puthupalayam and their adjoining areas.

Even as harvesting was going on, rain in the last two days has come as a spoilsport. “The crop has fallen in some areas. However, since it is ready for harvest, maximum yield can be achieved even if the water drains in a couple of days,” the officer said.

All paddy brought by the farmers would be taken at the DPCs, Ms. Dhanalakshmi said.