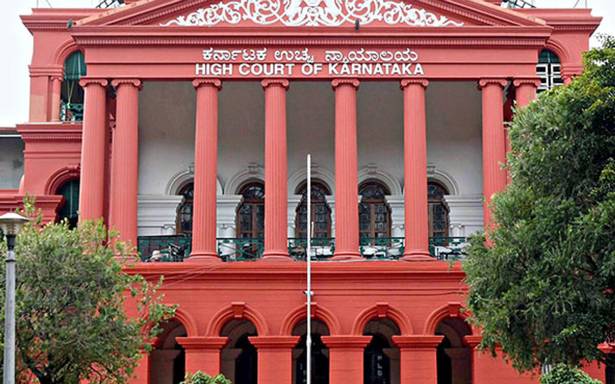 A three-judge Bench of the Karnataka High Court will hear on Thursday the petitions questioning the ban on wearing of hijabs by students in colleges.

On Wednesday, Justice Krishna S. Dixit, who was hearing the case, referred the petitions to a larger Bench while asking the Registry to place the petitions before the Chief Justice for constituting such a Bench in view of the urgency of the matter.

A three-judge Bench headed by Chief Justice Ritu Raj Awasthi and comprising Justice Dixit and Justice Jaibunnisa M. Khazi will take up the petitions for hearing at 2.30 p.m on Thursday.

“Considering the enormity of questions of law debated, this court is of the considered opinion that the petition papers be put at the hands of the honourable Chief Justice to consider if a larger Bench can be constituted in the subject matter,” Justice Dixit said in his brief order.

The “petitions give rise to certain constitutional questions of seminal importance in the light of some aspect of personal laws”, the order added.

It pointed out the judgments of various High Courts and the apex court cited by the litigating parties in support of their contentions on the issue of right to wear hijabs in educational institutions.

On the request of the advocates representing petitioner-students to permit the petitioners to attend classes wearing hijabs as an interim measure till a larger Bench was constituted, the court said that arguments for an interim order could also be made before the larger Bench.

The court also made it clear in its order that it was not recording the arguments made seeking an interim order by the advocates of the petitioners and the arguments of the Advocate-General, who opposed it, as it should not prejudice the larger Bench.

Earlier, Justice Dixit orally indicated that the practice in courts showed that larger Benches had decided legal issues related to personal laws, while pointing out that he was of the view that the issues required consideration by a larger Bench. Advocates representing the petitioners and the Government said that they were agreeable to any decision of the judge, either to refer the petitions to a larger Bench or continue hearing.

The court on Tuesday heard partial arguments on behalf of one of the petitioners questioning the validity of the Government Order issued on February 5 elaborating the policy on power of the schools and per-university college authorities to prescribe uniforms in the respective educational institutions.