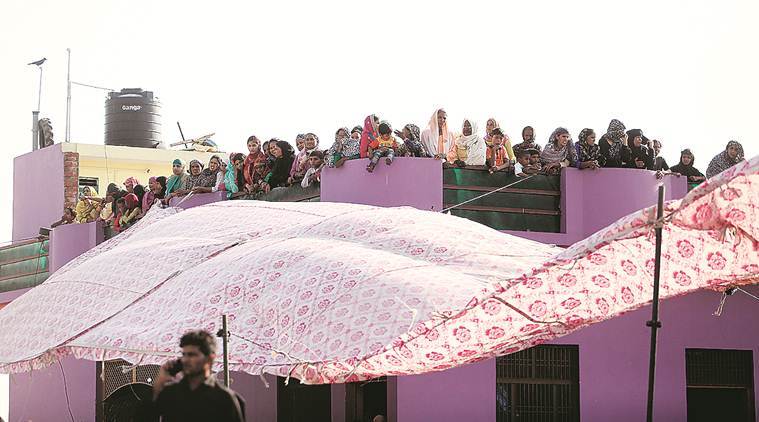 The police arrested Bilal (23), a maternal relative of the children, for allegedly plotting the triple murder. Two suspected accomplices are absconding, said the Bulandshahr police. The bullet-riddled bodies of three children were found in a tubewell tank 7 km from their home in Bulandshahr’s Selampur on Saturday. Abdul (11), Aliva (8) and Aasma (8), who were cousins, were allegedly shot at close range on Friday night, hours after they were taken away from their house in Faisalabad.

The police arrested Bilal (23), a maternal relative of the children, for allegedly plotting the triple murder. Two suspected accomplices are absconding, said the Bulandshahr police.

“Six teams were formed to look for Bilal, and he was arrested hours after the bodies were found. He confessed to plotting the kidnapping with one Salman, who allegedly shot the children. Prima facie it appears that Bilal might have done it for financial gain as also some family tussles,” said Ravindar Kumar, Bulandshahr ASP.

The three cousins were together on Friday night as Aasma’s father had organised an iftar party, police said. “Aasma and Aliva live in the same house as part of a joint family, and Abdul was visiting them. The children were kidnapped from the house after dinner… they went with Bilal as they knew him,” said a police officer.

Waseem (21), a relative of the deceased, told The Sunday Express, “It was iftar, the children were playing outside. The feast was arranged outside the house, and after dinner we all went inside by 9.30 pm. We panicked when we realised the children were not with us and began looking for them. Bilal too was with us, we had no reason to be suspicious.”

Bilal was part of the family’s search party on Friday night, and reportedly kept updating the other accused about the movements of the police and family. He allegedly floated a figure of Rs 10 lakh to save the children, to make it appear like an abduction, but the family dismissed it as hoax as no ransom call was received.

Around 2 am, the other accused, Salman and Imran, allegedly shot the children at close range and dumped them in a small tank. The bodies were spotted in the morning by a farmer.

The family claimed the three children went to a store to buy chips after dinner.

“The house has a CCTV camera but the children had stepped a few metres outside of its scope of vision. It’s when the children went to buy chips that Bilal facilitated their kidnapping,” said Waseem.

“Bilal pretended to help us look for the children, but was actually coordinating with the kidnappers. Whenever he would get a call, he would step away from the group. He took us to far-off places on bogus leads.”

“As per our initial investigation, Bilal and Salman have criminal cases pending against them. While the nature of cases against Bilal is being probed, Salman was allegedly involved in previous murders. Salman recently shifted to Bulandshahr as Bilal helped him get a flat. It appears the family did not approve of Bilal’s company. It is possible that this difference of opinion pushed Bilal to plan such a step,” said Atul Kumar Srivastava, SP City Bulandashahr. Police are also probing Salman’s relation with the family.

“SHO Dhruv Bhushan Dubey and munshi Ashok have been suspended. It appears that they delayed filing the missing persons complaint. While the Dial 100 cars had begun searching for the children, the policemen did not maintain proper documentation. Further investigation is pending,” said Kumar.

The day after, the pandal where the iftar was laid out was overshadowed with grief for the children.

“What was their fault? If Bilal had a problem he could have told us. The playful children were murdered brutally. How can one think of doing these things? said Aasma’s father Jamshed Ali.