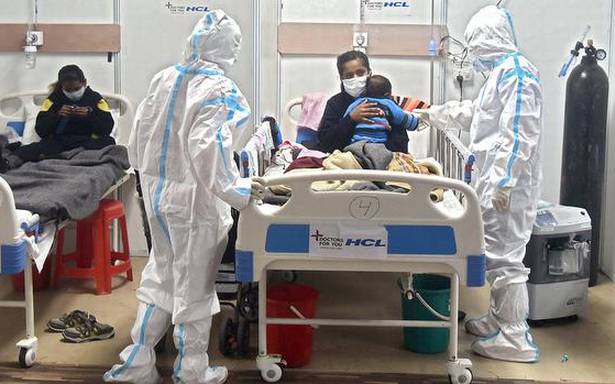 Health Minister Satyendar Jain on Wednesday termed the current surge in COVID-19 cases in the country the “third wave”.

“This is the fifth wave to hit Delhi and the third for the entire country. For the time being, the situation in Delhi is under control. In city hospitals there are plenty of beds available. For example, GTB Hospital has 650 beds set aside for COVID patients, of which only 20 are occupied. The occupancy rate is 2% to 5%,” he said.

The Minister said during the second wave when there were same number of cases in the city, the occupancy rate of beds was 15%.

The surge in COVID-19 cases continued on Wednesday with 10,665 new cases being reported over 24 hours — a 94.5% jump in a day — according to a Delhi government health bulletin. This is the highest new cases in more than seven months.

Also, eight COVID-19-related deaths were reported in the city, which is the highest in months. At least four of the eight victims had other ailments, said officials.

“Hospitals are getting some cases where patients are arriving only after their SpO2 levels drop very low and they have acute respiratory distress. People should keep monitoring themselves and not take their condition lightly thinking it is Omicron variant,” a health department official said.

Mr. Jain said for the time being there will be no lockdown in the city.

‘No need to panic’

“During this wave, the Delhi government’s goal is that not a single life should be lost due to lack of oxygen or other basic resources. There will be no lockdown in Delhi for the time being and construction work will continue as usual. There is no need for workers to panic… Delhi has taken the most stringent steps in the country to stop corona, such as weekend curfew, shutting down colleges and schools,” the Minister said.

The Delhi government has ordered to add 1,034 more COVID-19 beds in nine government hospitals and linked centres, according to an official order.

The Delhi Disaster Management Authority (DDMA), meanwhile, has cancelled all leaves granted to government employees in a bid to ensure adequate manpower to deal with the upsurge in COVID cases in the city. Only medical leaves will be allowed, if required, according to the DDMA order.

01/05/2022 India Comments Off on Third wave has hit us but situation under control, says Jain
India