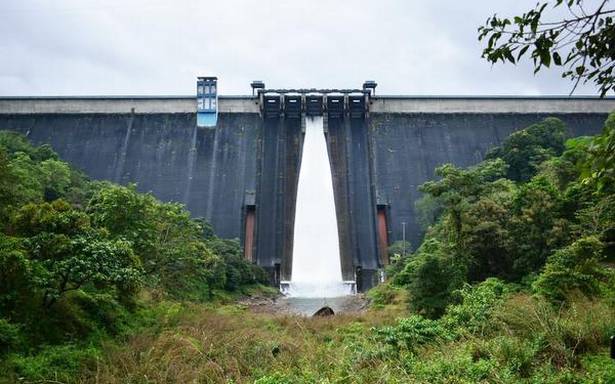 The third shutter of the Cheruthoni dam at the Idukki reservoir was opened at 10 a.m. on Thursday in the wake of increased inflow into the Periyar after the opening of the Mullaperiyar dam and heavy rainfall since Wednesday night.

Earlier, Idukki District Collector Sheeba George had said that the Cheruthoni shutter would be raised to 40 cm to 1 metre to release around 40 cumecs of water. Those living close to the river bank should take precautionary measures.

Fishing in the river and tourism activities have been banned. The Collector said that people should not cross or take bath in the river.

The timing of the opening of the shutter was fixed in accordance with the amount of water from Mullaperiyar dam reaching the Idukki reservoir, said Water Resources Minister Roshy Augustine.

The water level in the Idukki reservoir had been at the red alert level for the past two days. The full reserve level is 2,403 ft. There was a storage of 95.74% on Thursday, which was 88.86% on the same day last year.

The spillway shutters of the Mullaperiyar dam were opened at 8 a.m. to release 772 cusecs of water to the Periyar after water level reached the upper rule curve level of 141 ft. Tamil Nadu was drawing water at 2,300 cusecs, while the average inflow was 2,493 cusecs. The water suddenly rose to the present level following heavy rainfall in Periyar village on Wednesday night.

Meanwhile, there has been heavy rainfall in the high ranges of Idukki since Wednesday night.

Two shutters of the Kallar dam were also opened on Wednesday night to release 10 cumecs of water.