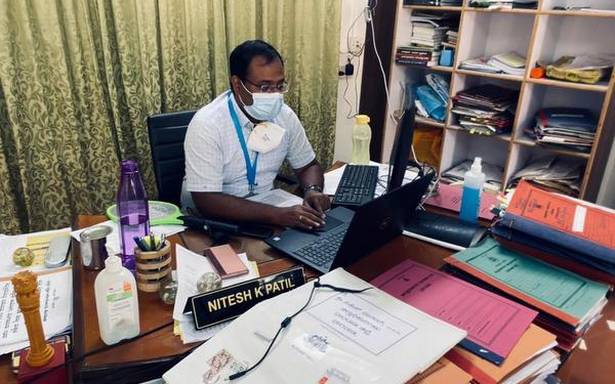 Arrangements are being made for additional 400 beds in Mother and Child hospitals and KIMS, says Deputy Commissioner

Deputy Commissioner of Dharwad Nitesh Patil has said that all the guidelines and restrictions imposed as part of partial lockdown to break the chain of transmission would be implemented strictly in Dharwad and violators would be penalised.

Addressing a virtual press conference from his office here on Tuesday, Mr. Patil clarified that there was no shortage of beds for COVID-19 treatment. In addition to the available beds, arrangements are being made to provide additional 125 and 100 beds, respectively in the Mother and Child hospitals in Dharwad and Hubballi, and another 175 beds in KIMS Hospital.

Mr. Patil said that the administration had extensively taken up the vaccination drive and so far, 2,25,278 persons had been administered Covishield vaccine and 13,680 perspons had been given Covaxin vaccine. This apart preparations had been made for giving vaccines to those aged above 18, he said.

The Deputy Commissioner clarified that under the curfew regulations, permission had been given for hotels and restaurants to operate but they would be allowed to offer only parcel services. He also clarified that there would no further or additional guidelines from the district administration.

The Deputy Commissioner clarified that no passes would be issued by the district administration or the Police Department. “Employees or workers of construction companies and industries should compulsorily have with them their identity cards or passes issued by the respective companies and when asked, they should be able to produce proper documents and give justification for their travel,” he said.

He clarified that steps had been taken to prevent unnecessary travel and business transactions other than those specified by the government. As per the guidelines, those proceeding to work notified by the government would have to produce requisite pass for the work or the pass issued by the respective agency, he said.

The Deputy Commissioner said that CT Scan was being done free in the Dharwad District Hospital and KIMS Hospital in Hubballi.

To a query, he said that only 50 persons would be allowed to attend marriages and passes would be issued by the administration for the same number.

Police Commissioner Labhu Ram said that unnecessary movement of vehicles was strictly prohibited and barricades would be installed at strategic locations. “We will book cases against those moving around unnecessarily and their vehicles will be seized,” he said.

Superintendent of Police P. Krishnakant clarified that there would be no check-posts on the district borders. Barring vehicles for essential services and goods transport vehicles, the movement of other vehicles has been banned, he said and added that cases would be booked against those selling essential commodities at higher rates.

Municipal Commissioner Gurudat Hegde said that all steps had been taken to ensure that there were no lapses in essential services.

After the media interaction, all the officials took questions from the general public who participated in the virtual conference and answered their queries on various issues.