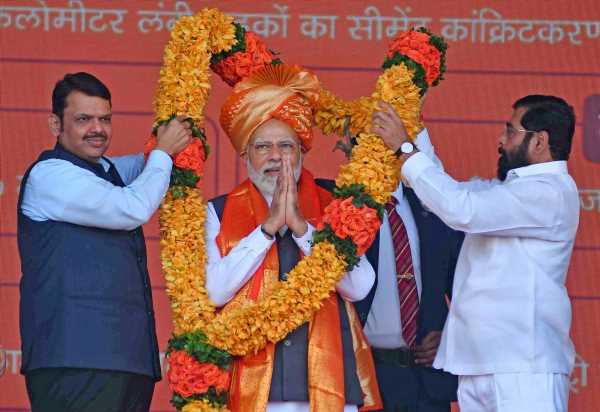 If Mr Modi is to be blamed for the post-Godhra riots, he should also be given credit for maintaining peace after the Akshardham and Ahmedabad terror attacks.
The BBC will never tell you that, points out Colonel Anil A Athale (retd).

I was then active in studying the Kashmir crisis and had earlier studied the Mizoram insurgency as well as the civil war in Sri Lanka.

In July 1993, I was invited by the British foreign office to visit Northern Ireland to study the Irish conflict (possibly the only such instance of an Indian being consulted on a British internal issue).

I was first briefed at the British home ministry in London and later traveled to Belfast.

At the end of my visit, I was invited by BBC Radio for an interview on their iconic 24 Hours programme.

That was when BBC Radio was prominent and international television had yet to penetrate India.

In my recorded interview, I compared the troubles in Northern Ireland with the problems India faced in Kashmir. Sure enough, the broadcast was cleverly edited with all references to Kashmir removed.

The BBC also put me on their panel of experts for the future.

As a part of my ongoing involvement in Kashmir, I was in Srinagar in October 1993 when Islamic militants occupied the Hazratbal shrine.

Hazratbal is most revered in Kashmir as it is believed that the shrine houses the Prophet’s relic.

The militants’s strategy was to force a showdown with the Indian Army in a repeat of the 1984 Golden Temple crisis.

On October 21, 1993, BBC’s Urdu service broadcast the news that the Hazratbal shrine has been burnt down by the Indian Army.

Srinagar and the Kashmir Valley was under a strict curfew at the time and most Kashmiris relied on the radio, particularly the BBC, to know what was happening.

As is to be expected, the fake news spread like wildfire and agitated mobs took to the streets.

I contacted the Indian Army’s XV Corps HQ and requested it to help me connect to the BBC in London (those were the days when this was no cakewalk).

I rang up the BBC, told them I was on their expert panel and physically in Srinagar and that the news of the Hazratbal shrine being burned down was false. The BBC did not respond.

The next day, a Border Security Force convoy passing through the town of Bijbehara on the outskirts of Srinagar was attacked.

The soldiers had no choice, but to open fire in self defence.

In that tragic event, 51 Kashmiri civilians were killed. The BBC has Kashmiri blood on its hands.

What BBC Will Not Tell You

All these memories were reignited as the BBC seems to be back at its old game.

The raking up of the old ghosts of the Gujarat riots of 2002 seems to be more an attempt to generate ‘Hindu phobia’ than to damage Mr Modi’s or India’s reputation.

Even a high school graduate with some knowledge of Indian history over the past 75 years will tell you that unfortunate as it is, periodic communal riots have been taking place in India.

In all these instances, it has always been the Indian Army that has been called upon to restore order and peace.

In normal times, there are at least 3,000 odd troops present in Ahmedabad, trained and familiar with the task.

But February 2002 was NOT a normal time.

The Indian Army as well as the paramilitary forces were deployed on the border, tensions with Pakistan were running high and war seemed imminent.

It is this fact that delayed the arrival of the Indian Army.

The Godhra incident that triggered the riots had a direct link to the border situation.

The BBC and all the Modi critics have consistently ignored this very vital fact. The BBC will never tell you this truth.

Mr Modi was the chief minister of Gujarat. There were no riots or any violence against Muslims despite these grave provocations.

If Mr Modi is to be blamed for the post-Godhra riots, he should logically also be given credit for maintaining peace in these instances. The BBC will never tell you that.

It is about time India calls out British hypocrisy in denigrating Indian democracy.

It is India that granted full citizenship and voting rights to all its citizens way back in 1952.

The United States gave full voting rights to Blacks in its southern states in 1963 and the British gave these rights to Catholics in Northern Ireland in 1968!

It is time for Indians to stand up to the BBC’s nefarious propaganda.

Colonel Anil A Athale (retd) is a military historian whose earlier columns can be read here.