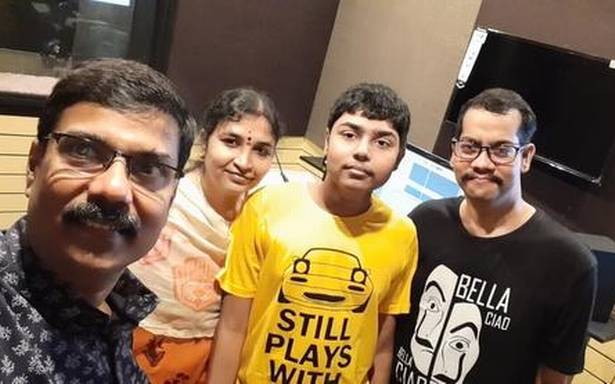 ‘Vaccination Is The Right Solution’ is 26-year-old Ashwin Prabhakar’s brainchild, cradled by the doctors in his family, which include his parents and aunt.

The Prabhakars’ had it shot on terrace of their house in Anna Nagar, with Ashwin and his ophthalmologist-aunt Chitra shaking a leg to the song.

Highlighting the salient features of two vaccines (Covishield and Covaxin), the song goes on to state that getting the jab does not signal the end of social distancing.

Ashwin has written the lyrics and composed the music. Did he come up with this idea, having been a witness to challenges at work faced by his parents as doctors?

“Nothing like that, I love music and thought of creating a video to create awareness about vaccination,” says Ashwin, who is well-versed in western and Carnatic music.

Ashwin’s father, D. Prabhakar, a cardiologist, admits to being surprised that his son would come up with the theme.

“Till he showed us a rough version of the song, we did not know Ashwin was working on a music video about vaccination,” says Prabhakar, adding that he has a learning disability and has been inclined towards music from an early age. With an orchestra group of his own, Ashwin plays music at weddings.

Dr. Chandini Prabhakar, dermatologist and Ashwin’s mom, tweaked the lyrics a bit to include names of the two vaccines. His father directed the video. Ashwin’s younger brother Akaash puts in an appearance. Ashwin’s uncle from Bengaluru, Bharath has lent voice to the song.

“We wanted a high-pitched sound and I thought of roping in a few of my doctor friends, but my brother-in-law Bharath did the job,” says Prabhakar.

The family has posted the song on YouTube, and it has been silently doing the rounds in doctor circles. “I had put it up as my status and over 600 people have seen them including those from the pharma industry,” says Prabhakar.

The song can be accessed on https://www.youtube.com/watch?v=v-f2fYqOVJE