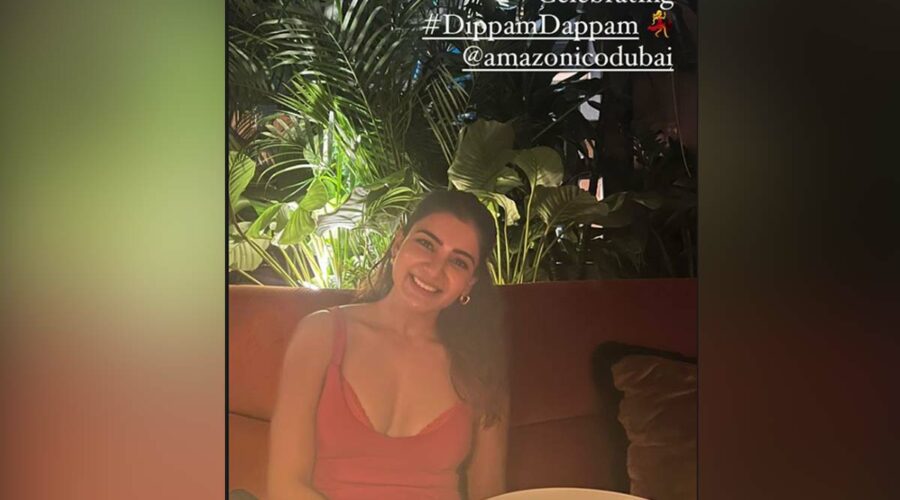 It is known that talented actress Samantha Ruth Prabhu has signed a new  Telugu project in which she will be seen sharing the screen space with Vijay Devarakonda under the direction of Shiva Nirvana. The film VD11 was launched today in Hyderabad with a formal pooja ceremony but Samantha was not present at the event.  Everyone is eager to know that main reason behind her absence at the launch event of VD11.  According to the latest report, Samantha is busy holidaying in Dubai. She has also been posting pictures of her holiday on Instagram.

Samantha has been sharing glimpses from her stay, the latest of which is a picture of the dinner time. In the photo, Yashoda actress is looking gorgeous in an orange dress.

Samantha will be seen in a crucial role in this film VD11 and it is the second time that she is working with Shiva Nirvana after Majili and with Vijay Deverakonda after Mahanati.

On the otherside,  Samantha is waiting for the release of Vignesh Shivan’s upcoming romantic drama, Kaathu Vaakula Rendu Kaadhal which also has Nayanthara and Vijay Sethupathi in the lead roles.  It will be out on 28th April. She will also be seen in Yashoda and Shaakuntalam.

04/21/2022 India Comments Off on The main reason behind Samantha absence at VD11 launch event!
India