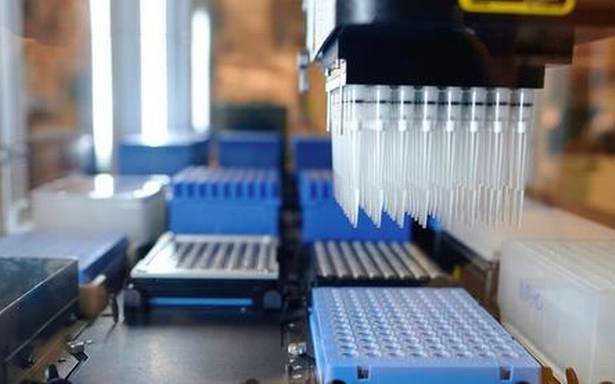 What has been INSACOG’s role through the pandemic? What are the challenges the forum faces?

The story so far: The Delhi-based National Centre for Disease Control (NCDC), a Union Health Ministry laboratory and a key INSACOG lab, has asked States to temporarily pause sending COVID-19 positive samples to it. Labs have been sending samples to check for the possible presence of the Omicron variant. This is because of the surge of Omicron in Delhi and the highly infectious nature of the variant.

INSACOG is a consortium of 10 labs and 18 satellite labs across India tasked with scanning coronavirus samples from swathes of patients and flagging the presence of variants that were known to have spiked transmission internationally. It is also tasked with tracking certain combinations of mutations that become more widespread in India. The institutes involved include the laboratories of the Department of Biotechnology, Council of Scientific and Industrial Research, Indian Council of Medical Research, and the Ministry of Health and Family Welfare (MoHFW). The NCDC is tasked with coordinating collections of samples from the States as well as correlating disease with certain mutations. The work began in January 2020, by sequencing all samples with a history of travel from the U.K. and a proportion of positive samples in the community.

What has it found so far?

The INSACOG sequenced about 1,00,000 samples as of early December 2021 when this data was last made publicly available. The bulk of its effort has been focussed on identifying international ‘variants of concern’ (VoC) that are marked out by the World Health Organization as being particularly infectious or pathogenic. International travellers who arrive in India and test positive are the ones whose samples usually get sent to INSACOG for determining the genomic variant.

The ‘foreign’ variants identified were primarily the U.K. (B.1.1.7) and South Africa variant (B.1.351) and a small number of Brazil (P2) variants. However, some labs flagged the growing presence of variants that were clubbed into a family of inter-related variants called B.1.617 known as the ‘Indian variant’ or the ‘double mutant’ variant, primarily due to two mutations — E484Q and L452R — on the spike protein. These have been individually identified elsewhere but not together. There are many more mutations that contribute in different measures, in ways not fully understood, to the virus being able to adapt to human hosts. The B.1.617 family was marked as an international VoC after it was linked to a spike in cases in the U.K. Following the sharp rise in cases that began in February 2020 and culminated in the deadly second wave that saw cases touch four lakh in May, the INSACOG confirmed that the wave was largely due to the Delta variant (B.1.617.2). After India, the variant went on to become the dominant variant globally and is now being rapidly displaced by the Omicron variant (B.1.1.529). After being labelled by the WHO as a VOC, Omicron is being tracked by INSACOG labs.

Beyond identifying patterns, why is genome sequencing useful?

The purpose of genome sequencing is to understand the role of certain mutations in increasing the virus’s infectivity. Some mutations have also been linked to immune escape, or the virus’s ability to evade antibodies, and this has consequences for vaccines. Labs across the world, including many in India, have been studying if the vaccines developed so far are effective against such mutant strains of the virus. They do this by extracting viruses from coronavirus positive samples and growing enough of them. Then blood serum from those vaccinated, and thereby containing antibodies, is drawn and using different probes, scientists determine how much of the antibodies thus extracted were required to kill a portion of the cultured viruses. Studies such as this have shown that Omicron, for instance, has evolved to evade antibodies much better than the Alpha or Delta variant. This prompted the push towards booster doses.

Given that COVID-19 is spreading, mutating and showing geographical variations, the original aim of the group was to sequence at least 5% of COVID-19 samples. But only 1% has been achieved yet, primarily due to a shortage of funds, insufficient reagents and tools necessary to rapidly scale up. While some of these are teething troubles, the INSACOG, inspite of being peopled by expert scientists, is ultimately within the Central government’s communication structure.

Not all INSACOG labs have the same quality of equipment and manpower and therefore a surge or spike in some cities can mean difficulties in processing.