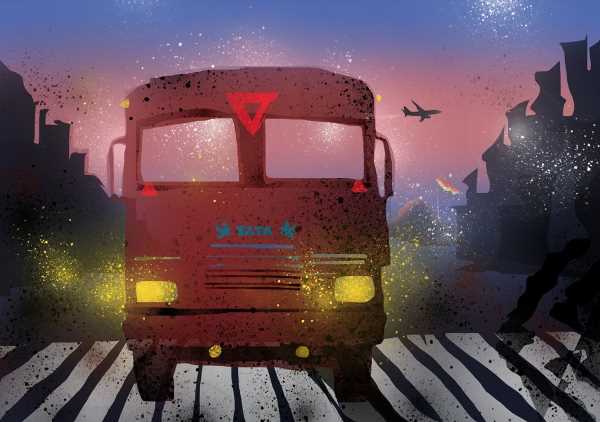 So, what’s the problem if our present is screwed up when the future promises to be profitable? It’s an Indian habit, notes Shyam G Menon. Having successfully crossed the road’s first half, we were two people waiting for traffic on the other side to ebb when a truck carrying a marine container thundered past behind us. “Can’t they drive slowly?” my neighbour yelled over the din.

Welcome to our road. Neither its name nor exact location matters for what counts is the paradigm at play.

Around two decades back, it was a completely different scenario.

The area we live in was the epitome of peace. Navi Mumbai’s Palm Beach Road was yet to be commissioned.

It was tarmac devoid of traffic, we used to jog on. As for our road, it had little traffic.

The downstream portions it connected to had no major projects.

Only a few container trucks rolled by, headed to the seaport. You could walk, run and cycle, safely. Then things changed.

Courtesy major infrastructure projects downstream, our road transformed from being a quiet and peaceful stretch to one usurped by heavy vehicle and passenger vehicle traffic.

We have a steady flow of tipper trucks plying to and from construction sites besides container trucks heading to the port.

On some days, it takes a long time to cross the road in front of our housing complex.

We have to cross it in two stages from one side to the middle and then from the middle to the other side while traffic zooms and containers clatter with a deafening sound, close to us.

This is the fate of all, from little children to elderly people.

Despite the sharp rise in traffic, there is not a single over-bridge for pedestrians to cross the road.

Delayed precautionary measures have been a hallmark of planners and traffic police in these parts.

Traffic lights rarely appear when a road is commissioned.

The authorities wait for vehicular flow to grow and gather indiscipline before intervening in the name of the law.

Or maybe such attitudes shouldn’t amaze for about a kilometre from our road, in another direction, is one of the most weirdly designed flyovers in the Mumbai region.

The Belapur flyover is built such that local traffic joins the larger vehicular flow in the middle of the Mumbai-Pune highway, unlike the sides as usually done.

People have died there, including one of Mumbai’s best-known endurance cyclists. 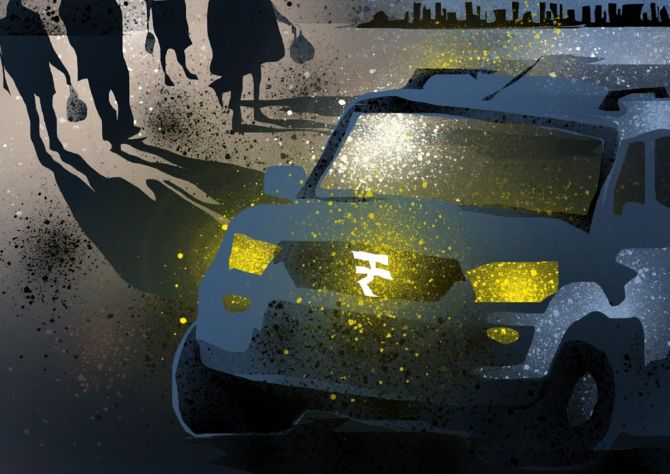 Back to our road — at times, we are treated to traffic jams; a long line of crawling trucks and cars because a vehicle broke down, got stuck or hit another.

In monsoon, slush coats the road as dust, engine oil and the mud and gravel from tipper trucks and concrete mixers — all end up a goo.

During the rainy months, when the footpath stays slippery, we share the road with scary traffic. Occasionally, tempers fly high.

Once, following an altercation, a motorist took his anger out on me by almost driving his SUV over my foot.

None of this impacts the local administration’s idea of residential ambience.

Residents, however, know the pattern. Once across the road, my neighbour, tracing the dust and din to its origin, said of the development bogey, “now this place will also become crowded and run down.”

I remembered my first ride on Mumbai’s monorail soon after it was commissioned.

Travelling on tracks that high from the city floor, you were in mess-free tranquillity.

The mess is what every place reduces to. Why can’t we develop differently?

In India, trucks and their ecosystem of unkempt metal bring a tinge of wildness to roads.

It is sad — betraying underlying neglect of a sector — because trucks and the goods they carry affect our lives much more than private vehicles do.

It took our industry ages to make the truck driver’s seat ergonomic. Official indulgence is reserved for private vehicles. Their numbers have increased.

An ideal transport policy must favour public transport over private transport. That has rarely been the case in India.

Had at least private vehicles been less, our road would have breathed better.

Private vehicles add variety in shape and behaviour to the Mad Max imagery.

As they — trucks, cars, two-wheelers et al — devour concrete in a collective surge towards you trying to cross, all that’s missing are the mohawk hair-cuts, leather jackets and bare butts. We will get there.

By then, I guess, the rest of us will be crossing the road on high strung zip-lines.

Further inside, on the smaller side streets, private vehicles evoke the comic with reckless parking.

Some geniuses park parallelly, a couple of rows deep.

When the vehicles on the inside leave, you get a car or SUV magnificently abandoned in the middle of the road.

Some others park large vehicles angularly on small roads leaving their tail ends jutting out like an obstacle course.

How did these people get licenses in the first place? – you wonder. And why do people buy vehicles the size of a small truck to ferry one or two persons? But then, unlike me still, on two legs, the motorised lot is important to GDP and protected by it.

Among the mega projects fed by our road, is Navi Mumbai’s upcoming airport. It was born a controversial project. Some people support it; some don’t.

Thanks to such infrastructure development, there are other projects – ranging from massive townships to bridges — now underway in the region.

The resultant surge in traffic is what vitiated the peace on our once quiet road.

Uniquely, in that classic Indian tradition of plotting salvation through money, few dwell on the air pollution and inconvenience such projects cause in their execution stage because once they are up and running, the value of the property we are sitting on goes up.

So, what’s the problem if our present is screwed up when the future promises to be profitable? It’s an Indian habit.

No wonder, there are people who call our dug-up, traffic laden-cities and their air pollution, ‘the dust of development’.

Viewed through the old Indian prism of living for monetary gain and status and the new one of the classroom with strict teacher, corporal punishment and front bench-lackeys asking no questions, the dust of development or the prashad of development, is what air pollution will be.

By the way that is actually what I heard In Nagpur some years ago, as we navigated landscape temporarily spoilt by a construction-metro. “Yeh vikas ka dhool hai,” I was told solemnly.

Consequently, I cough and sneeze my days through to a bright future of flights to London and New York just 15 minutes drive away.

They will fly copiously for sure. But for me? I don’t know.

In the meantime, I inhale the air polluted not just by traffic but construction dust and factory emissions as well.

Some nights, our sleep is interrupted by loud bangs from Mad Max Avenue; container trucks clearing a speed-breaker.

Knock off speed-breakers and any consideration pedestrians get on the road will vanish. It’s Catch 22; all part of the residential experience.

In some other countries, I suspect, this rubbishing of the present wouldn’t be allowed. They value their now.

They are clear — while new projects are welcome, they can’t be at the expense of damaging the quality of life for those already resident in the area.

Besides, will it hurt giant companies if they are told to route project related-traffic through roads that don’t spoil ongoing residential life? Whose finances are stronger to manage pollution — large companies that can absorb the added cost of vehicles travelling longer to spare residents pollution or ordinary folk like you and me, who must dip into their income to fund visits to the doctor, medical shops and hospitals, seeking relief from irritated throat and lungs?

If that doesn’t seem pretty enough for the visionary’s legacy, wait for the paid trolls to teach us how contemporary existence should be presented with pride and pomp.

The owners of our future have a quick fix for everything. Mine is anti-histamines.