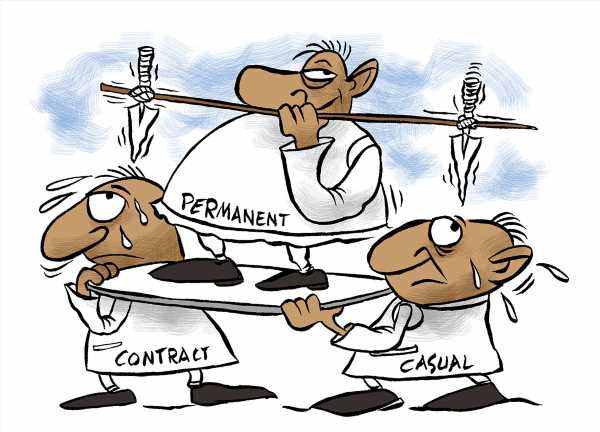 For large numbers of employees in the government system, the month-end salary cheque is no longer guaranteed.
So the days of the government and State-owned enterprises wanting to be ideal employers are over, observes T N Ninan.

The protests over the Agnipath scheme have died down, and youngsters have settled down to applying under the temporary job scheme for the armed forces — perhaps because they have no option.

In truth, though, this points to a larger trend in government employment and the caste system of permanent, contractual, and casual employees.

The first category gets paid much better than the latter two, and (at most levels) better also than the market.

Since water must find its own level, governments and their agencies have turned increasingly to hiring in the cheaper two categories.

Those who want to understand what this might mean would benefit from the black humour of the Hindi movie Eeb Allay Ooo (on Netflix).

Growing fiscal pressures have manifested themselves in two other ways.

One is the tendency to not fill vacancies, affecting (for instance) the postal system.

Worse is the second trend, of government employees simply not getting paid, sometimes for months together.

You could be a school teacher, a sanitation worker, or a social health (ASHA) worker.

For large numbers of employees in the government system, the month-end salary cheque is no longer guaranteed.

So the days of the government and State-owned enterprises wanting to be ideal employers are over.

A private sector employer could be prosecuted for non-payment of salary.

But when court cases are filed by unpaid government employees, senior officers simply plead before frustrated judges that no money has been made available.

To contractual and casual employees, this adds insult to injury because they do not benefit from decadal Pay Commissions — which five years ago decreed a minimum wage of Rs 18,000 per month.

That’s a sum which, however ‘minimum’, the overwhelming majority of workers in the country do not get.

Whereas permanent government employees are guaranteed not only that sum, often with housing attached, but also full inflation-indexation and job security, and of course pension and medical benefits for life.

Matters were made worse by the one rank-one pension decision, which sent the pension bill soaring in the armed forces.

So, in a period when the defence salary bill doubled, the pension bill trebled.

Two factors have encouraged governments and associate bodies to move away from hiring permanent employees.

One is obviously cost, the other is productivity.

In the absence of any reward system for work well done, there is no incentive to work.

At the same time, statutory provisions make it hard to use the stick.

Teachers with relatively comfortable salaries have been known to sit at home while sending surrogates to teach on their behalf in return for part-payment out of the teacher’s salary.

And office staff have been known to enforce informal quotas on how many letters they will send out in a day.

So the strength of contractual employees has doubled in four years to 2.43 million.

And their share in total government employment has soared.

In truth, the Agnipath scheme is merely an extension of the cost logic to the armed forces — the counterpunch to one rank-one pension, if you will, with inter-generational unfairness thrown in.

Meanwhile, in one of its infructuous interventions, the Supreme Court ordered some years ago that there should be no difference between permanent and contractual categories, in pay or benefits.

The railways are probably the only organisation to construct a portal to track the issue.

For the bulk of the government, the court’s order means nothing.

Sharp pay differences are the norm.

The unfairness of this caste system is not about to go away, especially since one of the new labour codes encourages hiring on contract (though another promises, less credibly, to extend various benefits to unorganised and gig workers).

Nor does it seem feasible to ask Pay Commissions to at least partially match pay levels with the market.

One solution might be to abolish altogether the notion of permanent government employment.

But one gets some idea of how difficult reform is when some state governments revert from a sustainable, defined-contribution pension system to a (discarded because unsustainable) defined-benefit plan.

As Mancur Olson warned long ago, entrenched interest groups will have their way.