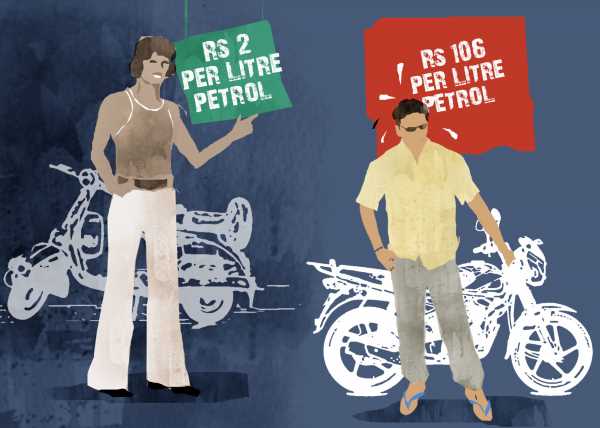 The ever-astute Ravi Matthai, Director of Indian Institute of Management, Ahmedabad in 1971, offered me a basic salary of Rs 1,000 per month on my return from the United States.
I doubt if IIMA could hire a faculty member at Rs 55,000 per month today! points out Dr Shreekant Sambrani.

Inflation is the leading topic on people’s mind, from the suits in pristine snow-bound Davos to sweating toilers in fetid Dharavi.

All sorts of reasons are proffered to explain the cancer affecting our pocketbooks, from the war in Ukraine to broken supply lines in Covid-affected China to the ever-present climate change.

Bilawal Bhutto Zardari, the Pakistani foreign minister, used all these and some more to glibly ‘explain’ why the price of wheat flour in Pakistan is 65 US cents a kg, evading the real culprit, the complete mismanagement of the Pakistani economy by successive governments.

Inflation in India has been a major concern lately, but appears at present to be under control.

That seems to be borne out by visits to local markets.

Vegetable prices are now the lowest they have been in a year.

That normally happens every winter, but not in the last two years.

Prices of the grocery staples — grains, sugar, edible oils — are all stable.

That provides relief to the average householder, but worries about rising prices are never too far below the surface in India.

A group of former members of the faculty of Indian Institute of Management, Ahmedabad, to which this writer belongs, recently attempted to answer an interesting question: “What is the worth of Rs 100 fifty years ago in today’s purchasing power?

One attempt was to compare the rupee-dollar parity:

A popular belief is that the rupee was valued higher than the US dollar in the early years of the twentieth century, some estimates being the rupee fetching $ 13.

This is wrong, but so popular it is that Janamejay Sinha, Chairman, BCG India, even wrote an article based on it.

The fact is that in the colonial days, the rupee was linked only to the pound sterling, and that too, from 1917 onwards as clarified by the Reserve Bank of India.

The exchange rate was fixed at 1 s 6 d to the rupee or approximately Rs 13.33 to the pound, which is where it remained until 1947.

The major problem, however, is that comparing nominal values of the two currencies does not actually compare their relative purchasing powers, as is well-known and accepted.

Another attempt was to use official price indices:

This, too, is not quite correct, although the results of such an exercise should be broadly in a realistic range.

The reason for this is that over this long period, the consumption mix and the weights assigned to the various items would change, some quite drastically.

For example, the weight for white goods, especially electronic items, would be substantially lower in 1973 than what it is today.

Similarly, cars would command a higher weight today as compared to 1973.

In consumables, kerosene would have had a higher weight in 1973, which is today perhaps occupied by LPG.

The quality would also vary. A car in 2023 is vastly different from the Fiats and Ambassadors of 50 years ago.

What is possible is a comparison between what Rs 100 could buy in 1973 and how much the same package would cost today.

This is the Big Mac index approach made famous by The Economist. I have done this for a few items below.

The figures are from my memory, but I believe they are pretty accurate.

Another relevant comparison would be of transport costs.

The Ahmedabad railway station — the IIMA campus one way auto fare was Rs 6 in 1972. I have no clue as to what it is today.

At Rs 550,000 you would easily get an entry level sedan today, which would be far superior to the old crates!

There are, of course, some exceptions. Gold, housing (and rentals), salaries, have all gone up by more than 50 times in this period.

The ever-astute Ravi Matthai, Director of Indian Institute of Management, Ahmedabad in 1971, offered me a basic salary of Rs 1,000 per month on my return from the United States.