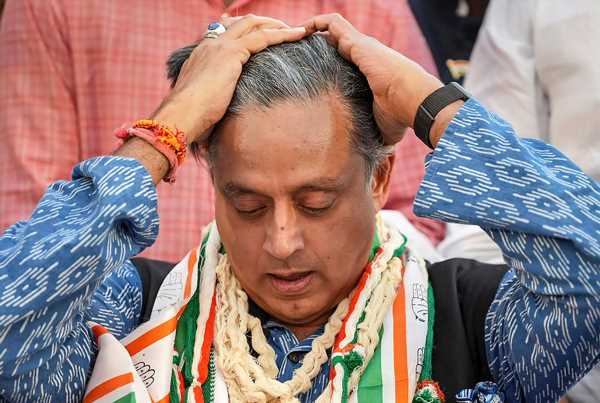 Amid questions over his future, many political observers believe he has enhanced his political stature and it will not be easy for his critics and rivals in the party to pull him down.

He lost the election but Shashi Tharoor managed to score many a political point during his campaign for Congress president, a contest he lost to veteran party colleague Mallikarjun Kharge who was favoured to win.

The author, wordsmith, former United Nations diplomat and social media pioneer with 8.3 million followers on Twitter demonstrated during the last few weeks that he is quite the opposite of a ‘quockerwodger’, a politically loaded term for a wooden puppet he introduced into our lexicon, and is instead independent minded, making moves on his own terms.

Tharoor’s loss is reminiscent of his electoral run in the 2006 UN secretary general poll in which he was defeated by South Korea’s Ban Ki-moon but not before creating a strong buzz.

It was in that contest perhaps that he first displayed his stomach for an electoral fight against daunting odds.

That the often outspoken Tharoor managed 1,072 votes against perceived Gandhi favourite Kharge’s 7,897 in the presidential election, only the sixth in the party’s 137-year-old history, is believed to be quite an achievement.

The 66-year-old raised issues of an uneven playing field during his campaign and his team filed complaints with the party’s central election authority. But he deftly walked the tightrope and continued to maintain that the Gandhis had pledged neutrality and stressed that the election is a significant step that will hold the party in good stead.

Amid questions over his future, many political observers believe he has enhanced his political stature and it will not be easy for his critics and rivals in the party to pull him down.

During the campaign, Tharoor batted for the empowerment of Pradesh Congress Committee presidents, block, mandal and booth presidents.

“We must decentralise authority and truly empower the grassroots office-bearers of the party. Our PCC delegates, for instance, have literally had no role for the last 22 years but to vote in the coming election on October 17th!” he said.

As his party battles an existential crisis with the new Congress president expected to put it on the road to revival, Tharoor also stressed in his campaign that the Congress must provide a credible alternative to the Bharatiya Janata Party’s “centralisation of authority”.

Seen as a rebel and one of the group of 23 leaders who wrote to Sonia Gandhi in 2020 seeking large scale reforms, Tharoor was candid in defeat.

He said the “democratic contest” has galvanised vibrancy at all levels and prompted a healthy and constructive discussion on change, which will serve the party in good stead in the future.

As speculation mounted on who would be in the race for the Congress president and most of his party colleagues demurred, Tharoor was the first off the block to declare he would contest.

Those who have followed Tharoor’s career path say two things — he is full of surprises and up for a fight without being deterred by the odds stacked against him.

Born in London in 1956, Tharoor graduated with an honours in history from Delhi’s prestigious St Stephen’s College where he was also the president of the student’s union. He did his masters from the Fletcher School of Law and Diplomacy, Medford, US, and completed a PhD from there in 1978.

Defying the politician stereotype, Tharoor went on to have a distinguished career in the UN.

During his stint at the UN, he shouldered several key responsibilities in peace-keeping after the Cold War and serving as senior adviser to the secretary general in addition to his role as under-secretary general for Communications and Public Information.

Three years later, he made a lateral entry into politics in 2009 to be elected as MP from Thiruvananthapuram for the first time on a Congress ticket.

Though his political journey began at 53, he took giant strides as a politician after winning the Lok Sabha election.

His candidacy was opposed by a section of leaders of the Kerala Congress who viewed him as an outsider.

Tharoor, however, won by a comfortable margin over his nearest opponent from the Communist Party of India.

He was appointed Union minister of state for External Affairs in the Congress-led United Progressive Alliance government.

Tharoor is a pioneer in using social media as an instrument of political interaction.

He was India’s most-followed politician on Twitter till 2013 when he was overtaken by current Prime Minister Narendra Modi.

The man of letters, making headlines for his politics and sometimes also for throwing little used words that have his Twitter followers reaching for the dictionary, finds himself at the centre of controversy every now and then.

In 2009, for instance, he made a comment about travelling ‘cattle class’ for which he had to apologise.

He was also accused of having a questionable interest in a cricket team from the Kerala city of Kochi while he was a minister. He resigned from the MEA in April 2010.

His personal life saw a tragic turn in January 2014 when his wife Sunanda Pushkar was found dead in a suite of a luxury hotel in New Delhi.

Tharoor was later charged under section 498A (husband or relative of husband of a woman subjecting her to cruelty) and 306 (abetment of suicide) of the Indian Penal Code by Delhi Police. A Delhi court discharged him in the case last year.

The year of his wife’s death was also when he won a second Lok Sabha term from Thiruvananthapuram, swimming against the tide of a massive Modi wave.

In 2019, he won the seat for a third time, defeating his main rival and BJP-NDA candidate Kummanam Rajashekharan by a margin of 99,989 votes.

Tharoor has been a prolific writer and authored about 23 books, including “The Great Indian Novel”, “An Era of Darkness”, “Why I Am A Hindu” and “The Paradoxical Prime Minister”.

He has also won several awards and bestowed with prestigious honours such as the Commonwealth Writers’ Prize for the Best Book of the Year in the Eurasian Region for “The Great Indian Novel” and Spain’s Commander of the Order of Charles III as well as France’s Chevalier de la Legion d’Honneur.