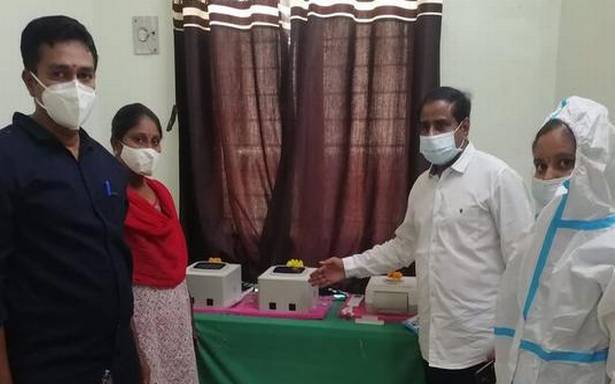 The district, which has been reporting 2,000-plus cases for the last ten days, saw a slight fall in Monday’s tally with 1,621 cases.

While this is not unusual on weekends due to reduced testing and fewer staff at the testing centres, the positivity rate in the district during the last three days stood at 32%.

The district’s cumulative coronavirus tally reached 1.6 lakh while the toll reached 1,100 as on Monday. Of this, 40% of the cases and more than 180 casualties were reported during the second wave of the pandemic, i.e., from mid-April till date.

As per information, Chittoor district remains in the second place in the State on the list of total positive cases and occupies the top spot when it comes to the total casualties since the outbreak of the pandemic.

Despite the alarming figures, testing remains inadequate, says a senior medical officer attached to the laboratory tests. “Compared to the first wave, the number of tests currently going on are not sufficient. Till a few weeks after the second wave had commenced, the number of tests daily all over the district remained around 3,000, while it gradually rose to 8,000-plus only a few days ago,” he says.

When the spread was at its peak last year, the number of daily tests remained over 10,000 and the positivity rate was considerably low. “We need to ramp up testing to 15,000 a day, with focus on rural areas,” the official maintained.

It is observed that the delay by three-to-four days in getting the results has prompted several persons to opt for rapid tests, while many of those who tested positive are going into home isolation without informing the officials concerned.

The fear of acquiring the infection while standing in long queues at the testing centres has led to increase in people going to private labs while others are taking medications at home without informing officials. The rude handling of the queue lines at some centres by the field staff is also said to be a reason driving away the public towards private labs.

Some key officials in the COVID Task Force deplored that those who take the rapid tests at private labs are at a risk of getting “unsure” results at 60:40 ratio. As such those who test negative are taking the results for granted, and not going to the RT-PCR tests for confirmed results. This is contributing to the casualty rate or last-minute admissions.