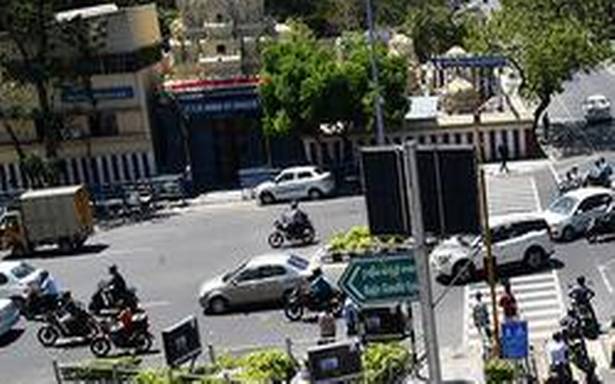 The 640-metre-long L-shaped flyover will have 18 spans

Tenders are to be called shortly for the construction of a unidirectional two-lane wide flyover at the Madhya Kailash junction in the city. The State Government accorded an administrative sanction of ₹46 crore recently, for the facility that will help those driving from Sardar Patel Road to Rajiv Gandhi Salai avoid waiting at the signal.

“At least 60% of the traffic in that direction turn towards Rajiv Gandhi Salai, which is why it was designed as a unidirectional flyover. It will take off at a point, 300 metres from the existing IIT flyover, and land on OMR,” a source in the Highways department explained.

Asked if it would be possible to connect the proposed flyover to the existing one, the official said it would not suit the traffic pattern in the area. “Vehicles proceeding from Kotturpuram would not be able to use the new flyover in such a scenario,” he said. The 640-metre flyover will take 18 months to be constructed and will require land for the formation of service lanes on either sides. Land, measuring up to a width of five metres, would be required for the lanes. Any trees on the way would be transplanted. The facility, with 18 spans, will be a simple L-shaped one and traffic will be diverted during the construction. R. Krishna a resident of Thoraipakkam, who welcomed the flyover, said even though it would be difficult for travellers during the construction period, it would help reduce waiting time at the signal later. “Two more flyovers are coming up on OMR. We need flyovers at Thoraipakkam and Sholinganallur junctions too, where the traffic volume is quite heavy. The DMK government had announced that five new flyovers would be constructed on OMR. Hopefully those would come up soon,” he said.