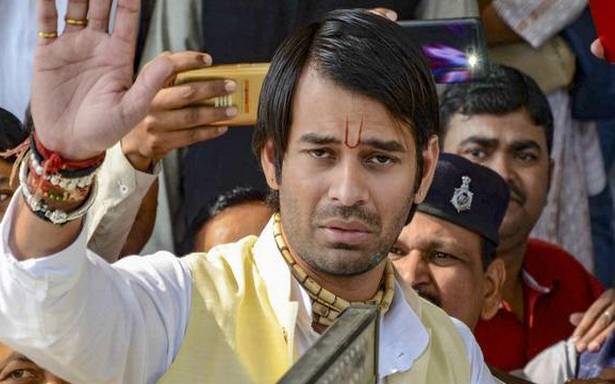 Lalu Prasad’s elder son Tej Pratap Yadav on Friday turned up at a function hosted by Union minister Pashupati Kumar Paras, triggering speculations about the maverick RJD leader, who wears his religious fervour on the sleeves, cosying up to BJP-led NDA which his father has always fought tooth and nail.

Mr. Tej Pratap raised many eyebrows when he walked down to the Patna office of the Lok Janshakti Party’s faction headed by Mr. Paras, to attend the first death anniversary of the LJP’s late founder and former Union minister Ram Vilas Paswan.

Warmly received by Mr. Paras, the Hasanpur MLA took the mike to express his full support to the Union minister’s demand that his deceased elder brother be given the Bharat Ratna.

While Mr. Tej Pratap chose to honour the invitation extended by Mr. Paras, younger brother Tejashwi, who lives just a few hundred metres away, preferred to pay floral tributes at his residence where a portrait of Mr. Paswan was placed alongside that of Jayaprakash Narayan, whose death anniversary falls on the same date.

Mr. Lalu Prasad, who is in Delhi, visited the residence of Mr. Paswan’s son Chirag to take part in the function organised on the same occasion. The RJD supremo has been trying to woo the Jamui MP, isolated in the LJP since the split, stressing the close relations he shared with the deceased Dalit leader.

Mr. Tej Pratap was also conspicuous by his absence at a meeting of RJD MLAs convened by Mr. Tejashwi to discuss the strategy for by-elections to Tarapur and Kusheshwar Asthan assembly segments.

The development came a day after Mr. Tej Pratap’s name was omitted from the list of the party’s 20 star campaigners.

“Names of Tej Pratap, Misa (Prasad’s eldest daughter and Rajya Sabha MP) and Rabri Devi (wife, ex-CM) do not figure in the list as they had expressed their inability to take part in the campaign,” a senior party leader who is known to be close to Prasad’s family said on condition of anonymity.

“Not much should be read into the matter. These are just by-elections,” he insisted.

However, the BJP, which is the RJD’s principal rival, was quick to fish in troubled waters with the remark that omission of their names signalled “time is up for Misa and Tej Pratap”.

Although younger to Ms. Misa and Mr. Tej Pratap, Mr. Tejashwi, a favourite of his father, has overshadowed his elder siblings in terms of clout in the party.

A former Deputy CM who is at present leader of the opposition in the state assembly, Mr. Tejashwi emerged as the party’s de facto leader while his father was in jail, serving sentences in fodder scam cases.

Mr. Tej Pratap, who likes to dress up like Hindu deities, has often compared himself to Lord Krishna and Mr. Tejashwi to Arjuna, in a bid to send across the message that far from being an adversary, he was a protector of his younger brother.

The state’s political firmament has, nonetheless, been witness to many an outburst of the volatile leader, who floated an outfit named after his parents when some of his confidants were not considered for party tickets in the Lok Sabha polls.

Recently, another close aide of his walked over to the party headed by Paras upon being sacked as the chief of the RJD students’ wing. Mr. Tej Pratap reacted by forming a parallel students’ body, leaving the party rank and file flustered.