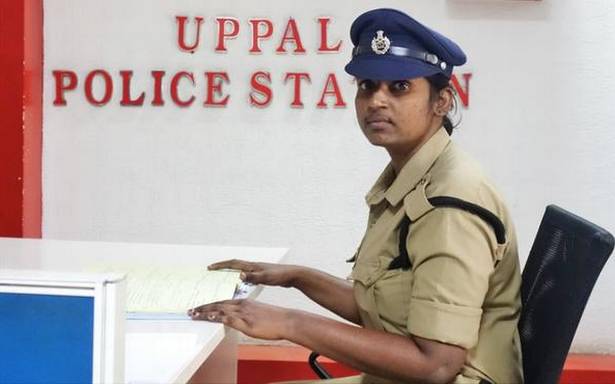 Hard work always pays off. In the case of D. Shiva Rani, a woman police constable, it is consistent hard work.

She is one of the few women in the police department in the entire country to win an award for significant contribution in implementation of Crime and Criminal Tracking Network and Systems (CCTNS). Holder of M.Tech. degree, she is working in Uppal police station of Rachakonda commissionerate covering the eastern part of the State capital.

Unlike other police personnel, Ms. Rani’s work does not involve chasing or catching criminals. Her main task is to upload the data of crimes and criminals to CCTNS.

After completing her training, she was first posted to Uppal. On learning of her technical qualifications, higher-ups assigned the work of uploading data to CCTNS. On the face of it, the work appeared to be easy. But soon she realised that data of crimes from the year 2013 had to be fed into the CCTNS. That was a mountainous work, but the young constable vowed to finish it.

She would start early in the day, continue to work till midnight and sometimes beyond it. “It was a challenge but I decided to complete it,” Ms. Rani says. She had to upload seven integrated forms like Crime Detail Form, Case Diaries Part I and II, seized properties, arrest card, charge-sheet and final report. Eventually, she had to enter court case numbers, court case diary, details of any compromise in Lok Adalat and final judgments.

What made Ms. Rani different from the others was the interest she took to update the data by approaching colleagues in the police station. Slowly, she uploaded entire records of the police station from 2013 till date. “There are no pending file in our police station to be uploaded barring the fresh cases,” says the confident constable.

Third among four siblings, Ms. Rani lives with her younger brother and mother. Her elder sister and brother are married and live separately. Her father died when she was very young. Her mother worked as labourer to support the family. Hailing from Ghatkesar on city’s eastern fringes, Ms. Rani completed schooling there.

While in the final year of engineering programme, she reached final stages of selection for a couple of top IT companies in campus placement. “Since I was not thorough in English language, I could not score well in group discussions and was not selected,” she recalls.

She taught math to school students to support the family while taking up an assistant professor job at a private engineering college. But the salary was meagre. When she got selected as a constable, she jumped at the opportunity since she had to support her ageing mother and younger brother who suffers from hearing-related problems. “I have no regrets. My mother simply said to continue the hard work on learning about the award. Hard work always pays off,” says Ms. Rani.