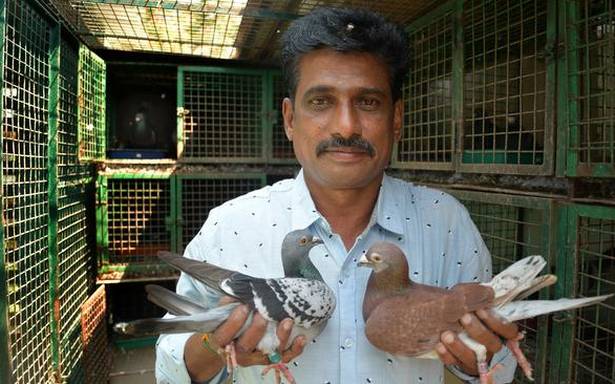 It has been a busy few weeks for pigeon sport enthusiasts in the city as the racing season calendar that starts in January and ends in May, has taken off. In end-January, the season opened with the Rock City Open race, which saw over 200 pigeon ‘fanciers’ from 30 districts liberate their birds from eight different points in Tamil Nadu and neighbouring states.

Organised by Tiruchi Racing Pigeon Club (TRPC), the race is an important event for pigeon sport lovers in the state.

“At least 30-32 of our homing pigeons have flown up to Bhopal and come back home in recent years. Due to lockdown restrictions, we were able to hold only short-distance races (up to 500 kilometers) on our schedule. The results are still being collated, as we wait for the birds to return,” D. Ashok Kumar, of Tiruchi Racing Pigeon Club (TRPC), told The Hindu.

The races pit the ability of several trained pigeons, to fly over a set distance, in a given period of time. The bird with the highest velocity (the distance flown divided by the time taken), is declared the winner.

In addition to the 33-year-old TRPC, the newly formed Tiruchi Rockfort Homing Pigeon Association (TRHPA) is the other club promoting pigeon sports in the city.

While little has changed in the way the pigeons are trained, of late technology has streamlined the method of clocking the races and brought in greater transparency.

Puducherry-based Twilight Softwares has developed the photo-app called ‘Le Spot On’, which calculates the bird’s velocity from the point of liberation to the fancier’s place down to the most accurate geographical positioning details. “It gives us a clear result, because there will be human error such as in the referee miscalculating the velocity of the bird,” said C. Rajesh Murugan, the software entrepreneur and keen pigeon sport fancier who developed Le Spot On.

At least 40 pigeon racing clubs are in operation throughout Tamil Nadu, with most of them using the Android subscription-based app.

Trained like athletes, racing pigeons are maintained by their human owners in customised lofts and fed a nutrient-rich diet to build stamina.

“There are fanciers in Tiruchi who don’t mind spending lakhs of rupees on fortified feed for their sporting pigeons, so this is considered quite a costly pastime,” said R. Sethuraman, secretary of TRHPA.

The racing pigeon (or more accurately, racing dove), also called the ‘racing homer’ for its ability to return to its nest and mate after flying long distances, was developed in 19th century Belgium by inter-breeding the Smerle, French Cumulet, English Carrier and Dragoon bloodlines.

The city’s fanciers said that vans transporting the panniers filled with birds going to the liberation points for races were often stopped by the authorities despite having all the requisite paperwork.

“We hope the government will help us to ease the process and help the sport to progress to the next level,” said Mr. Ashok Kumar.