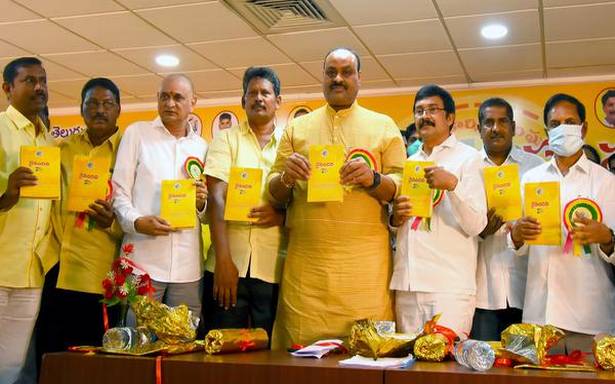 ‘State has fallen into a debt trap’

TDP State president K. Atchannaidu on Monday said he was confident of former Chief Minister and TDP supremo N. Chandrababu Naidu returning to power in the State in the next Assembly elections.

The TDP leader urged people to ‘not repeat their mistake of electing the YSR Congress Party (YSRCP) in the last elections, which resulted in the State falling into a debt trap.

Interacting with reporters, Mr. Atchannaidu said that only able leaders like Mr. Naidu would be able to put the State back on the path of progress. “A.P. has to get ₹6,500 crore from Telangana towards the power sector as part of the assurance given at the time of the bifurcation of the State. The credit for introduction of reforms in the power sector goes to Mr. Naidu. During the tenure of Mr. Naidu as Chief Minister, there was a power deficit of 22.5 trillion units. He had pumped in ₹36,000 crore and procured 10,000 MW of power,” Mr. Atchannaidu said.

He alleged that Chief Minister Y.S. Jagan Mohan Reddy has no administrative capabilities and said the government was planning to close the Rayalaseema Thermal Power Plant though the power generation in the State has declined. Uninterrupted power was being supplied during the TDP rule, he claimed.

“We felt that the workers stood with us as their services were regularised and we gave them DA and HRA during the TDP rule. They (workers) were won over by the false promises made by Mr. Jagan Mohan Reddy during his padayatra. The Chief Minister’s statement that their salaries would go down if PRC is given, is ridiculous,” Mr. Atchannaidu said.

Mr. Atchannaidu said that the TDP should be voted back to power again to ensure justice for workers.

12/28/2021 India Comments Off on TDP will win next polls: Atchannaidu
India