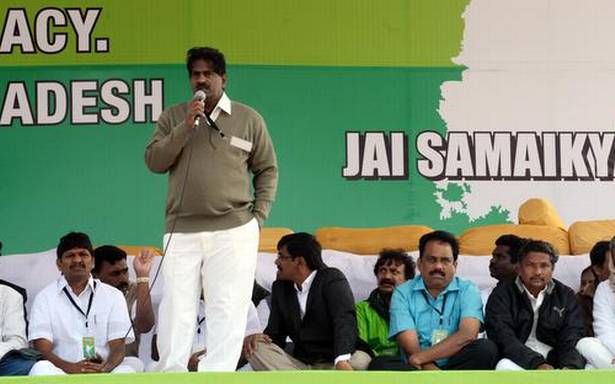 Mr. Ashok Babu alleged that around 500 women from Thamballapalle Assembly constituency were sheltered in Kuppam agriculture market yard to cast votes through impersonation on November 15.

Similarly, around 100 field assistants of DWMA are staying in CLRC building near Ganeshpuram, around 300 sarpanches and MPTC members and councillors belonging to YSR Congress Party (YSRCP) from Punganur and other adjacent Assembly constituencies reached Kuppam on November 13.

Among them, those who may be recognised by the media are staying 15 kilometers away from Kuppam while others took shelter in Kuppam municipality itself. It appears that the police are escorting outsiders into Kuppam town. Further, it has been noticed that the YSRCP cadre along with village/ward volunteers are distributing ₹3,000 to ₹5,000 per vote along with voter slips, he alleged.

The presence of outsiders after the campaign deadline was a serious violation of the election Model Code of Conduct (MCC) while casting of fake and illegal votes is unconstitutional and undemocratic. It is suspected that the outsiders present in Kuppam town may vitiate peace and tranquility by disturbing the law and order in order to mar the polling on November 15, he felt.

It is pertinent that the SEC gives webcasting links to all political parties or to their representatives or to contesting candidates to ensure transparency in polling.

Simultaneously, uninterrupted video recording of polling should be carried out on the polling day. In the light of the series of violent incidents, it is pertinent to increase security and ensure adequate protection at all polling stations in Kuppam, Mr. Ashok Babu added.