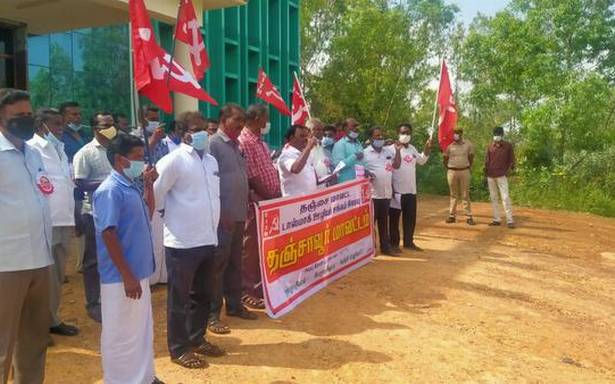 Members of the CITU affiliated TASMAC Workers Union staged a demonstration here on Friday in support of their demands.

The demonstrators, many of whom failed to adhere to COVID-19 appropriate behaviour, assembled at the premises of the Office of the Deputy Commissioner (DC) (Labour), Thanjavur district, and raised slogans demanding regularisation of their services, grant of weekly-offs, holidays on festival days and ESI benefits.

Meanwhile, the CITU, Tiruvaur District Unit, had also organised a meeting of the TASMAC Workers Union at the CITU office here on Friday.

Other resolutions that were passed such as issuance of identity cards to loadmen at the TASMAC godowns, provisioning of potable drinking water and first-aid box at the godowns, enhancement of salary and extension of health insurance to the employees were passed.