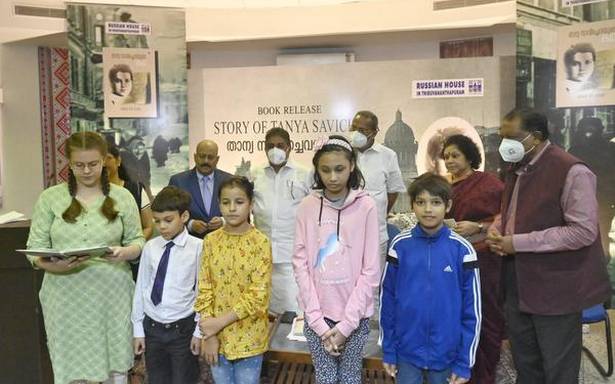 Tanya Savichevayude Katha (The Story of Tanya Savicheva), the Malayalam biography of a Russian girl whose short diary brings to life the horrors of the Siege of Leningrad during World War II, was released here on Friday.

Enlarged pages from the diary were on display at the Russian House (formerly Russian Cultural Centre), the publisher of the work. The book release event opened with Russian children reading from the pages of the diary.

The biography, which goes into Tanya’s life in detail and also carries rare photographs from the siege, has been written by Ratheesh C. Nair, the Honorary Consul of Russia, in Thiruvananthapuram.

2021 marks the 80th anniversary of the start of the Great Patriotic War (following the German invasion of the Soviet Union).

Minister for Cultural Affairs Saji Cherian released the book by handing over a copy to former Ambassador T.P. Sreenivasan.

Humankind had not learned its lessons from the sufferings gifted by the two World Wars, Mr. Cherian said. Crores died in World War II that ushered in sweeping geopolitical changes. Ten lakh people died in the Siege of Leningrad (present-day St Petersburg) by the invading German forces, he said.

Tanya’s diary contains only the details of the deaths of her family members. But it sufficed to illustrate the misery and despair of the children caught in the war, he said. The Minister added that it was our duty to protect the younger generation from the ravages of war and terrorism.

The Soviet triumph over Germans led to the Allied victory in the War, Mr. Sreenivasan said. However, Soviet Union lost 2.7 crore lives, he pointed out.

Tanya did not survive the war. But her diary, which runs into just nine pages, was recovered by her sister and is today preserved at the St Petersburg History Museum.