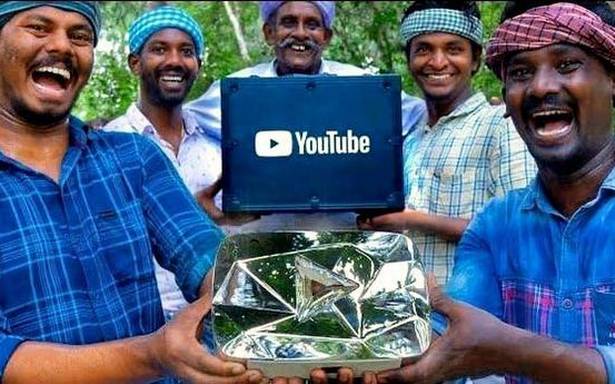 The farmers-turned-YouTube stars who took their village, Chinna Veeramangalam in Pudukkottai district, to an international audience through traditional cooking videos have garnered one crore subscribers.

The Village Cooking Channel was awarded a Diamond Play button by YouTube for its achievement. The group donated ₹10 lakh from their earnings to the Chief Minister’s Public Relief Fund (CMPRF) to aid the fight against COVID-19.

“Ellarum vaanga, always welcomes you!” — this is how the enthusiastic team of six welcomes viewers to each video on the channel. The group, comprising cousins V. Subramanian, V. Murugesan, V. Ayyanar, G. Tamilselvan and T. Muthumanickam, and led by their grandfather and former caterer M. Periyathambi, began the channel as a way to pass time when they were not engaged in cultivating their agricultural lands.

“We began this channel to pass time when we had no work, and to supplement our income. All men in Chinna Veeramangalam can cook, and we decided to show it to the world,” Mr. Subramanian, the team’s in-house cameraman and tech expert, said.

The team earns around ₹7 lakh a month from the advertising revenue generated by YouTube views. As viewership has increased, so has the quantity of food cooked in the videos. “We utilise at least one-fourth of the money we make on purchasing ingredients and preparing a feast,” Mr. Subramanian said. “We serve the food to our friends, relatives and other people in the village,” he added. “Amid the lockdown, we began serving food in old-age homes and orphanages,” he said.

The Village Cooking Channel is the first YouTube Channel from Tamil Nadu to have one crore subscribers. “We have seen videos of several YouTubers who have the Diamond Play button with their names engraved on it. They will be speaking in several languages, but never in Tamil. We are proud to hold this distinction, and we thank Tamil people for this,” the group said in a video uploaded to the channel.

Periyathambi, better known as thaatha, or grandfather, tore up as he held the Diamond Play button. “It is amazing that a company from the U.S. is recognising our efforts in Pudukkottai. I can’t believe the videos we made here, in our village, have reached people across the world,” he said. “My advice is that we must believe in our abilities,” he added.

To commemorate the achievement, the team donated ₹10 lakh to the CMPRF. “We were going to send it to the Chief Minister’s office, but we got an opportunity to meet him and personally hand it over,” they said.