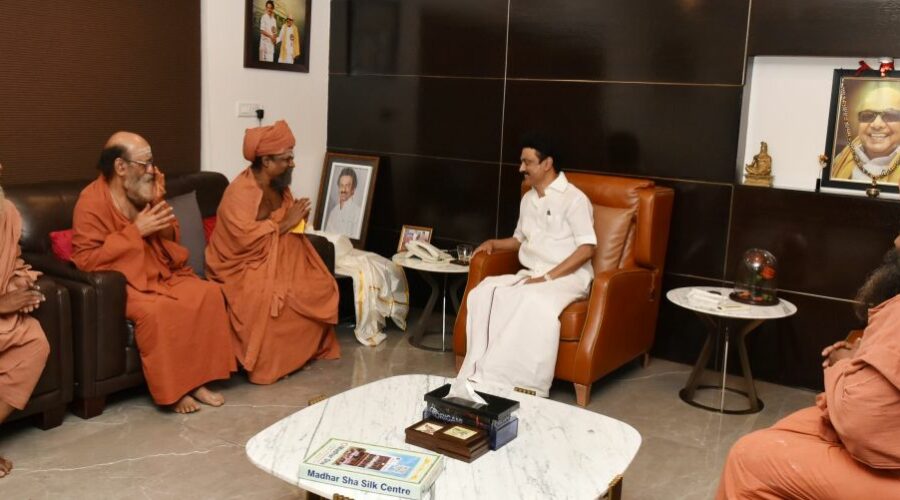 Stalin’s personal intervention in the Adheenam row may have contained the avoidable political damage and social tensions at least for now, observes N Sathiya Moorthy.

If by stalling the pattina pravesam of Dharmapura Adheenam, the ruling Dravida Munnetra Kazhhagam in Tamil Nadu had revived perceived memories of the party’s ‘anti-Hindu’ past, Chief Minister M K Stalin’s personal intervention, to accept the suggestions of other mutt heads, may have contained the avoidable political damage and social tensions.

However, it could not stop the intervening television channels/social media debate if Saiva Sidhantham, or Saivite philosophy, as being propagated by the Dharmapuram mutt and others, was only a Hindu sect or a stand-alone religion.

The mutts are repository of religious literature, arbiters of religious rites and procedures and also owners of thousands of acres of lands, bestowed by kings and zamindars, to maintaining the multitude Saivite temples and their staff under their care.

And the term ‘Adheenam‘ stands for a Saivite monastic institution, mostly located across southern Tamil Nadu, and also its head, mostly upper caste non-Brahmin Hindus, with the incumbent installing his successor.

And ‘pattina pravesam‘ refers to the ritualistic, ceremonial procession when followers carry the mutt-head in a palanquin, on their shoulders.

The row started when local revenue officials declined permission for a periodic event that has been in vogue since the Dharmapuram Adheenam came into being in the 16th century.

The reason/ruse was that making people carry another on their shoulders was inhuman and violated their human rights.

The mutt and its followers, who too date back by generations and centuries, were upset, and other monastic heads took up the matter all the way up to the chief minister.

Stalin met them in Chennai on Saturday, May 7, 2022, and seemingly gave into societal pressure than attendant political pressure, predictably from the state Bharatiya Janata Party, led by acerbic president K Annamalai and others.

For Stalin, it was an avoidable embarrassment at he was entering his second year in office.

Yet, it is unclear if the local officials took the ban decision on their own or had kept the higher-ups, up to the popular HR&CE minister P K Sekar Babu and Stalin in the loop.

But the damage had been done as Stalin at best did only limited damage control. The reasons are not far to seek.

As a social media post pointed out, the Karunanidhi family/trusts have obtained gifts of land from the Dharmapuram Adheenam, which the late leader’s father had served, to set up memorials and other social service institutions through past decades.

Ahead of last year’s assembly election, Stalin’s son Udhayanidhi had visited the Adheenam and received the personal blessings of the mutt head. An avoidable social media discourse also did the rounds if he had applied the kumkum prasad offered by the Adheenam on his forehead, or not.

Barring exceptions like the current head of the equally famous Madurai Adheenam, non-Brahmin Saivite mutt heads have stayed away from politics and politicians, unlike some of their Brahmin counterparts in the state.

It is true of Brahmin mutt heads, too, though a few ones like the Mannargudi Jeer, who threatened that state ministers couldn’t walk the streets if the pattina pravesam ceremony was not allowed in Dharmapuram.

The incumbent Madurai Adheenam has taken a pro-Hindu/Hindutva line, but only on matters religion.

His predecessor, a former Tamil newspaper stringer, had taken the other extreme, often taking pan-Tamil political positions and sharing platforms with such political leaders, espousing the ‘Tamil cause’ on the Sri Lankan ethnic issue, the ‘Cauvery water dispute’ and the like.

There are others like the Kundrakudi Adigalar, both incumbent and predecessor, who allowed themselves to be identified with pan-Tamil groups, but in the cause of promoting Tamil language and literature.

They too could not escape political branding, whether they desired it or not.

At the height of the pattina pravesam row, the Madurai Adheenam declared that the DMK government was as always anti-Hindu and that he would violate the ban and become a palanquin-bearer for his Dharmapuram counterpart.

The BJP’s Annamalai and a host of other party leaders also declared their intention to do so.

Now, after the state government’s decision, which tantamount to non-interference, with the traditional practice, the Madurai Adheenam especially has declared that like the rest of them all, he too would cooperate with the government.

But the Madurai Adheenam’s politicisation of the issue did lead to an intervening debate if the Saivism that he practised and propagated was the same as Hinduism, which was an ‘interpolation’ into early Tamils’ life.

To the protagonists, Saivism and Hinduism were different as the first predated the second.

They asked why the Madurai Adheenam was defending Hinduism, which was an antithesis to Saivism that pre-dated the former.

Some like Dravidian ideologue, film-maker and powerful platform speaker Pazha Karuppiah, former legislator, went as far as to argue the ‘Dravidian origins’ of the Indus Valley Civilisation (3300-1300 BCE), and said that it was a Tamil civilisation which worshipped Siva Lingam, as seen from the Harappan excavations.

According to them, later-day ‘Aryan invaders’ from across the Khyber Pass, subdued the Tamils in those parts, drove them down South, and hijacked their gods and religion and subsumed them into their Vedic religion, gods and deities.

While in between, the other side claimed to have scientifically proved that Hinduism was native to India, inclusivist, and encompassed different sects and beliefs, the pan-Tamil revivalists have cited very recent ‘archaeological evidence’ from Keezhadi and such other places in southern Tamil Nadu, to argue that Tamil civilisation was twice as old as the Indus Valley Civilisation — something that has since been reportedly dis-proved by Beta-analysis of some artefacts done in the US.

It is in this context that Stalin’s announcement about extending Tamils/Tamil Nadu-related archaeology in other countries where they had migrated early on, needs to be understood.

The attempt is to establish the independent antiquity of the language and the people.

Greater the BJP-ruled Centre’s efforts at underscoring its Hindutva agenda as Hindu practices and imposing Hindi on non-Hindi people greater is the socio-political compulsions on the state’s Dravidian rulers (to whichever party they belonged) to revive and re-establish their people’s ancestry and identity with the scientific tools now available to them.

This identity, they believe, was allowed to be subsumed in the the nation’s ‘constitutional integration’ as different from the RSS type of ‘cultural integration’.

The DMK, which had fought for a separate ‘Dravida Nadu’ until 1960, gave up the slogan and the cause only after being convinced that the constitutional scheme was all-embracing.

The protagonists of the idea in the present generation (as different from the Dravidian ideological predecessors in the previous century) see less of such ‘accommodative Constitutionalism’ and more of ‘cultural nationalism’ of the Sangh Parivar kind, which they are unable to digest, hence accept.

In this background, the self-appointed defenders of Saivism have argued that it’s the religion of the Tamils, and all its prescriptions are in Tamil.

They cite Tamil saint-poets who had lived a thousand years and more ago, to argue their case.

They may have a point, at least a theoretical one.

Adi Sankara, who is credited with reviving Hinduism after the ‘Dark Ages’ from the 3rd-6th century CE, composed in Sanskrit, the ‘language of the gods’ to some/many.

‘Hindu revivalism’ in the Tamil land at around the same time owed it to some of the Nayanmars and Alwars, the blessed saint-composers of Saivism and Vaishnavism respectively, whose works are in Tamil.

This linguistic dichotomy did distinguish, if not divide, fellow-religionists, as also their castes — identified not necessarily with gods or rituals but with language.

So much so, Vaishnavism of every sect and caste in these parts follows a Tamil linguistic tradition, introduced by Sri Ramanujacharya, who lived up to 120 years of age (1017-1137 CE).

Today, the Naalayira Divya-Prabandham, or Paasurams, a collection of 4,000 verses by the 12 Alwars, in praise of Lord Vishnu and his 10 avatars, is standard recital in all Vaishnavite temples and family rituals across Tamil Nadu.

So much so, the Vaishnavite-Brahmins have pure Tamil words for various prasads, or offerings to the gods, or even daily food items, like Thirukan-amudhu (payasam/keer), satthamudhu (rasam/south Indian soup) and kaaramudhu (poriyal, or stir-fried vegetables).

Saivites, however, are divided on linguistic lines, the Brahmins among them reciting Vedic hymns like Rudram and Chamakam in Sanskrit, and the non-Brahmins sticking to the Thevaram, Thiruvasagam and Thiruppukazh, all in Tamil.

There is one difference, though.

The Saivite-Brahmins do worship Vaishnavite gods and at their temples, which is not the case with non-Brahmin Saivites, at least until recent decades.

The reverse also used to be the case with Vaishnavite Brahmins, but all of it is changing with the times.

In triggering an argument that Saivism is not Hinduism, it is this linguistic background that is getting highlighted unconsciously or sub-consciously.

As may be recalled, it is the Tamil savants of religion, both Saivism and Vaishnavism, and a succession of multiple Adheenams, Jeers and the like who had revived the local religion at the end of the Dark Ages, during which time Jainism and Buddhism from the North had thrived, supposedly under the reign of the Kalabhra dynasty and even later.

In all this, those like Pazha Karuppiah claim that poet-freedom-fighter Subramania Bharati (1882-1921), incidentally a non-conformist, iconoclast Brahmin, had introduced the word ‘Hinduism’ locally.

Until then, they argue, the Tamils followed only four streams of faith and worship — Saivism, Vaishnavism, ancestral worship and what is commonly known in Tamil as ‘Nattar‘ worship, or worship of a local saviour or protector.

Such claim may be far-fetched, yes, but then, to date, the last two remained across rural Tamil Nadu as the only form of worship until not very long ago.

They go beyond untouchability and temple-entry programmes, the latter only a century or less old, as various communities continue to have their own deities and temples, unrelated to Saivism and Vaishnavism proper, but somewhere relating to either.

Hinduism proper and Hindu gods as are known, including Siva, Vishnu and Murugan, the popular Tamil god-son of the former, are only secondary in their schemes, at least until recently.

In the same breadth as his pan-Tamil Saivism arguments, Pazha Karuppiah also told a local television news channel how not just in Tamil Nadu, even in neighbouring Karnataka such debates have become contemporary.

As he pointed out, under the Congress government of then chief minister Siddaramaiah a section of north Karnataka’s dominant Lingayat community — deriving the name from Siva Lingam and hence Saivites — had wanted theirs declared as a religion independent of Hinduism.

Convinced of their case, Siddaramaiah even got the state legislature to pass a law to the effect. It is still awaiting presidential assent — which is more likely not to be given.

In Tamil Nadu meanwhile, now that the Adheenam-centric row has been settled, indications are that the Saivism/Hinduism dispute too would die a natural death — with anticipated revival if and when another occasion of the kind offered itself.