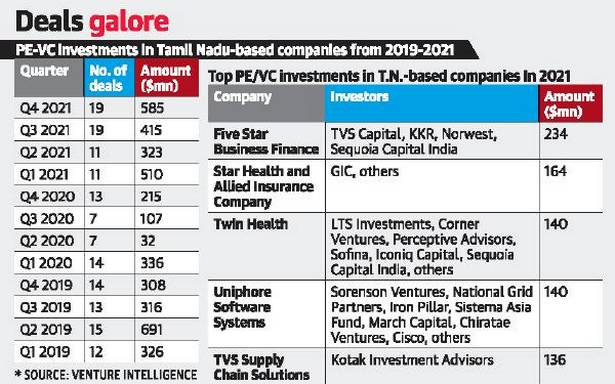 About $1.8 billion worth investments made; fintech start-ups make a mark

Private equity and venture capital companies invested around $1.8 billion in Tamil Nadu based firms through 60 deals during 2021. Data collated by Venture Intelligence, a research firm focused on private company financials, transactions and their valuations, shows that in the first quarter of 2021, firms invested $510 million across 11 deals and during the second quarter around $323 million came through 11 deals.

Arun Natarajan, founder of Venture Intelligence, said: “PE-VC investments in Tamil Nadu-based companies zoomed 166% year-on-year in 2021 to over $1.8 billion (across 60 deals). Fintech start-ups from Chennai like M2P Fintech, CredAvenue and GuardianLink made a strong mark on the radar of Indian and international VC investors during 2021,” Mr. Natarajan said.

“It was also interesting to see B2C brands from the State like Juicy Chemistry, TenderCuts and The Indus Valley attract VC investors from outside the State,” he added.

“The Nasdaq IPO of SaaS unicorn Freshworks and exit of cross-border software start-up Ally (via acquisition by Microsoft) is only going to put more wind behind the sails of the enterprise technology start-ups in the State,” Mr. Natarajan said.

Investments by Angel Networks and “Super Angels” in Tamil Nadu-based companies also grew by 46% year on year to 38 deals in 2021. The number of such investments registered a steady rise in each quarter during 2021, Mr. Natarajan said.