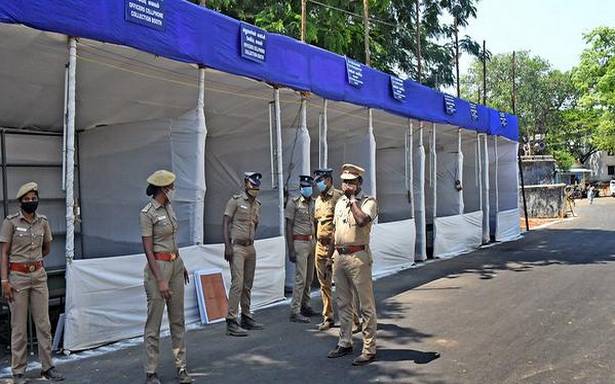 Counting of votes to begin at 8 a.m. in 75 centres amid stringent COVID-19 protocol and security

Counting of votes for the 16th Assembly election in Tamil Nadu will begin at 8 a.m. on Sunday amid a stringent COVID-19 protocol and heavy security. Votes polled in the byelection to the Kanniyakumari Lok Sabha constituency will also be counted.

The State recorded a voter turnout of 72.78% in the April 6 polling, with 3,998 candidates in the fray. Nearly all exit polls have projected a victory for the DMK-led alliance. The party is aiming for a return to power after 10 years in the Opposition. The AIADMK hopes to retain office for the record third consecutive term.

More than 35,000 security personnel have been deployed across all counting centres. The Election Commission has directed the political parties to refrain from taking out victory rallies. The State will be under the total lockdown on Sunday.