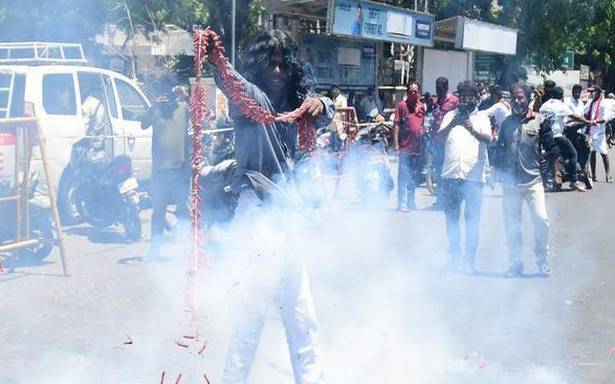 The Dravida Munnetra Kazhagam (DMK) led by M K Stalin was on Sunday elected to power in Tamil Nadu after a gap of 10 years. The Secular Progressive Alliance led by it either won or established leads in156 seats in the 234-member House in an election held for the first time without the towering presence of two stalwarts, DMK president M. Karunanidhi and AIADMK leader Jayalalithaa. Several ministers were either defeated or trailing by late evening.

Mr Stalin, who was Deputy Chief Minister in an earlier DMK regime [2006-11], is set to become Chief Minister, as the DMK moves towards a majority of its own, expecting to bag 125 seats late on Sunday night. The DMK fielded candidates in 173 seats [including some of its allies who contested on rising sun symbol], while 15 candidates from alliance partners contested on their respective symbols.

The AIADMK under outgoing Chief Minister Edappadi K Palaniswami put up a decent fight and as per trends was expected to bag about 66 seats, while its allies PMK and BJP were leading in five and four seats respectively.

It was a creditable performance, as it came just two years after it was routed by the DMK alliance in the Lok Sabha elections. The National Democratic Alliance led by it and comprising the BJP and Pattali Makkal Katchi was expected to win 78 seats.

The election results reinforced the bipolar nature of Tamil Nadu politics dominated by the DMK and AIADMK as like in 2016, this time too no candidate outside this alliance is set to enter the Assembly. All candidates of fielded by the alliances led by Makkal Needhi Maiam of actor Kamal Haasan; Naam Tamilar Katchi led by Seeman and Amma Makkal Munnetra Kazhagam founded by TTV Dhinakaran were headed for defeat. This was a repeat of 2016 when only candidates of AIADMK and DMK fronts won.

The Congress, which is part of the DMK alliance, performed well, and as per trends is touted to increase its presence in the Assembly to 17 from a mere eight seats in 2016. The party, in the process, redeemed its name as a creditable performer, as it was seen as pulling down the alliance when it won only eight out of 41 seats last time. This time, it was allotted 25 seats and it also won the Kanniyakumari Lok Sabha seat, where a bypoll was held.

What has, however, added to the strength of the DMK is the four seats that are likely to be won by the Marumalarchi Dravida Munnetra Kazhagam(MDMK), led by Vaiko, that contested on the DMK’s ‘Rising Sun’ symbol.

Other alliance partners, including the Manithaneya Makkal Katchi (MMK), which also contested on the DMK’s symbol were likely to win in four seats.

The Bharathiya Janata Party (BJP), which went to the polls in league with the AIADMK, is entering the Assembly after 20 years. In 2001 the party won in four seats in the company of the DMK, which was part of the A.B. Vajpayee-led BJP government at the Centre. Now it won/established leads in four out of the 20 constituencies allotted to it.

Pattali Makkal Katchi (PMK), predominantly representing the Vanniyar community and another ally of the AIADMK, was able to win/lead in just five out of the 23 constituencies it contested. The outcome has come as a surprise, as the creation of 10.5 per cent exclusive reservation for Vanniyars was expected to boost the party’s efforts to regain its vote base in the Northern and Western region of Tamil Nadu. Barring the BJP and PMK, other allies of the AIADMK contested on the Two Leaves symbol.

When the counting began in the morning, it was a close fight in many constituencies and the DMK’s lead gave the impression that it might depend on its alliance partners to form the government as it happened in 2006 (with outside support from Congress and PMK). It, however, gradually improved its performance and reached the figure needed to form a government without outside support.