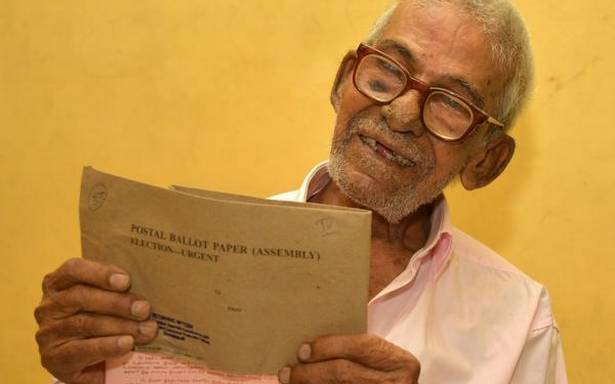 A 102-year-old man cast his vote through the postal ballot from the convenience of his home at Mela Kalkandarkottai in Tiruchi on Tuesday.

Born in 1919, P. Michael said that he had voted in every election since the age of 29, at least 34 times. This time, however, was the first time he did not have to leave his home to practice his democratic duty, he said.

Enter Mr. Michael’s house in Alli Street, Mela Kalkandarkottai, and one will either hear the news on television or catch him reading the newspaper. "I like to keep up with current affairs," he said, peering from behind a newspaper. A retired employee of the Golden Rock Railway Workshop, he served 29 years in the electrical department before retiring in 1977. Since then, newspapers and prayers keep him occupied.

On Tuesday, Mr. Michael cast his vote through the postal ballot, as the Election Commission of India had permitted the elderly over the age of 80 and Persons with Disabilities the facility. "This is the first time he has voted from home. Even during the 2019 Lok Sabha elections, he hailed an autorickshaw to the polling booth, voted and returned home on his own," his daughter-in-law said.

When asked about the experience, Mr, Michael, father of three, and a widower, said that it was convenient and would prefer to do it this way. He was, however, unhappy about not having the indelible ink on his finger.

Though memories of his youth have faded, Mr. Michael was able to recollect taking up election activities in his early twenties. “I have even picked fights with election officers for showing allegiance to a party on polling day,” he said." "My friends and I used to distribute leaflets during election season before I started to work in Tiruchi. Elections those days were simpler as we had to choose only between three parties – AIADMK, DMK and Congress,” he said.

When asked who would win the Assembly elections this year, Mr. Michael smiled. "I know the party I voted for will win. I have never voted for any other party my whole life," he said.