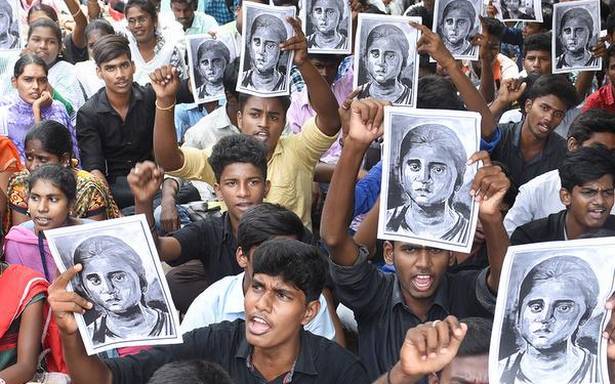 Unfilled vacancies, job security and pay parity are the other issues faced by teachers.

In the last four years, the Tamil Nadu government has insisted that it is against the National Eligibility-cum-Entran- ce Test (NEET) for admission to medical courses. But the Central government has had its way and made NEET mandatory. Last year, NEET was essential for admission to colleges of the Indian systems of medicine, too.

Recently, the National Testing Agency announced that NEET would be required for admission to B.Sc. Nursing.

While activists have been up in arms against the imposition of NEET, parties have remained silent this time.

The implementation of a revised syllabus aimed at getting the State board students ready for competitive exams and the 7.5% reservation in government medical colleges have tried to soften the blow. Teachers’ associations continue to demand a level playing field. “While we are not opposed to entrance examinations, it is only fair that they are held on a level playing field. NEET was conceived on the basis of the CBSE syllabus, and all our students are expected to take it, which is a huge disadvantage,” says P.K. Ilamaran, president of the Tamil Nadu Teacher Association.

A long-standing demand for shifting education to the State list has gained momentum ahead of the election because many teachers believe it will ensure equality and will be a better way to assess and make decisions on the needs of the State. “The government should take up a comprehensive survey to study the quantitative and qualitative needs of government schools,” says S. Arumainathan, State president, Tamil Nadu Students Parents Welfare Association.

“The State should stop giving out recognition and keep a check on the number of private schools. Its attention should be on strengthening the public belief in government schools and making elementary schools better to attract parents early,” he explains.

The National Education Policy, 2020, was the subject of much discussion in the State and a committee was formed to study it. The outcome is unknown yet, but several activists have suggested a thorough assessment of the State’s needs before implementing it.

College teachers do not want the policy implemented either. Their priority is the filling of the huge backlog of vacancies. Around 1,500 faculty positions are vacant for technical programmes. A similar number of vacancies exists in government and aided colleges. Associations want the government to regularise the services of eligible guest-lecturers who are paid less than what the University Grants Commission recommends.

Teachers want an Act to protect their jobs and pay parity and demand enforcement of the existing Act to prevent extortion in the form of capitation fee and implementation of reservation in education and employment in aided and self-financing colleges.

“Teachers feel demotivated as the workload is high. We want a separate technical university that will oversee the admission process for technical courses. Already we are doing the entire process.

There is no clear data in the government on how many candidates were moved out of Annamalai University as surplus staff to other colleges. Even the Opposition has not raised the issue…,” rues an office-bearer of the polytechnic teachers’ association.

The Aided College Teachers’ Association has demanded the rejection of the National Education Policy. The Association of University Teachers has demanded protection of aided courses from the clutches of private managements. It wants a statutory body to fill the vacancies for teaching and non-teaching staff members and a committee to determine the fee for each course in aided and self-financing colleges.

An Act to protect jobs and ensure pay parity for teachers in self-financing colleges is also needed, says its general secretary M.S. Balamurugan.