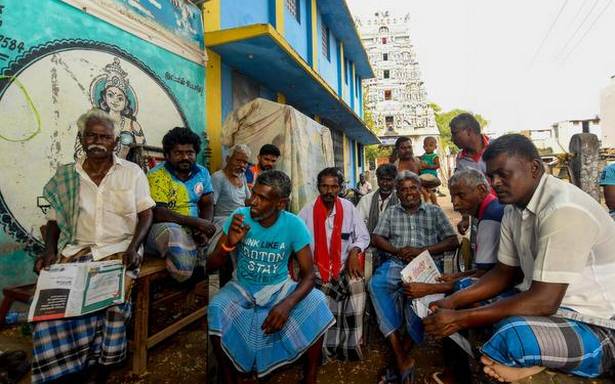 About 40 kms southwest of Madurai, is a tiny hamlet called Vannivelampatti, where every morning Karl Marx, Jyothi Basu, Fidel Castro, Lenin and Stalin gather at the village common for gentle banter and hot tea. They aren’t stage artistes but ordinary villagers named after Communist leaders. All in their 40s and working as farm labourers in the maize fields that dot the villages on the road to Rajapalayam (in Virudhunagar district), their morning discussions are an unfailing ritual now that the Assembly elections are round the corner.

Over steaming tumblers of sweetened tea and poring over sheets of the daily Theekkathir, their conversations veer around the crushed dreams of the working class. It attracts other village elders and some youngsters as well and they all sit against the backdrop of the Vembulaiyan Swamy Temple.

A few yards away, Dmitri keeps a watch on the kids, who are at home due to the pandemic, prancing around his autorickshaw while Ramamurthi takes a walk against the breaking rays of the sun with a handful of kids, named Sankaraiah, Gowri Amma, Janaki Ammal and Nripen Chakraborty, all of them wearing signature Che Guevara T-shirts.

“The T-shirts were this year’s Pongal gift to all the children in the village,” Ramamurthi says with pride and adds, “no matter which way the political wind blows, Vannivelampatti village under Thirumangalam constituency in Madurai district has a reputation to maintain.”

“We may not look like the original leaders or match their achievements in any way, but we wear their names with pride because they give us the courage to demand justice and never give up the fight against inequality and discrimination,” says 28-year-old Safdar Hashmi, who works as a gym coach.

Red has been the intense colour in this village with 3,000 voters, the villagers’ love for the party is unflinching. Over the years they have stuck to an interesting practice of naming their children after national and global Communist leaders. Those who bear the burden of carrying the great names continue to accept it as an exception in their lives.

Like class VII student Venmani says she has been told the importance of her name but can’t quite figure out the impact and also found it odd many times during the roll call at school. Her father Karl Marx says though the unique naming fashion in the village is on the decline, every family makes it a point to attend the party meetings in the region.

“That is what our parents did when we were small. It was motivating and empowering to listen to the top leaders speak,” says Mr. Castro, “and so we take our children with us and also make them read the party pamphlets on the struggles against caste and class atrocities.”

“There is some disenchantment but we will vote for the DMK-CPM alliance because we neither believe in nor want religion and caste-based politics to enter,” he adds.

Perhaps this is why no party or leader’s photos are visible in this hamlet of 900 families. The only posters spotted here highlight the importance of voting for truth and not money.

“Political party candidates do not even bother to enter our village for campaigning,” says Mr. Lenin.

Does that stop development from touching their village?

“Yes,” he says. “No pucca (blacktop) road has ever been laid inside the village and no toilets built. A few poor quality ones were erected under the Swachch Bharat Abhiyan but they did not stand long.”

“We are safe from corruption and that makes us happy,” says Dmitri, who at 39, has been sent to jail half-a-dozen times for protesting against different government policies. He says when they go to VAO’s office for some work, nobody dares to ask them for bribes!

“Peoples’ power and our self-assertion movements should not be under-estimated,” he says.