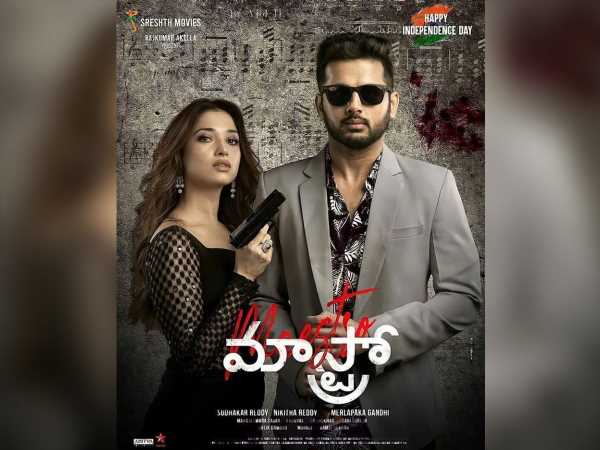 The young actor Nithiin is busy in the promotional activities of upcoming film Maestro, which is remake of Hindi blockbuster movie Andhadhun starring Ayushmann Khurrana, Tabu and Radhika Apte in lead roles.  The film, directed by Merlapaka Gandhi, the Telugu version has Tamannah reprising Tabu’s role and Nabha Natesh playing Radhika Apte’s character. Today on the occasion of Independence day, the makers of Maestro released a new poster. Coming on the poster, Tamannah Bhatia is seen threatening Nithiin with a gun.  It is known that Nithiin is pretending as a blind person in Maestro.

Nithiin, who was last seen in Rang De, is thrilled about the release of his upcoming film, Maestro.  The entire shoot of Maestro has been wrapped up. While Nabha Natesh is paired opposite Nithiin,  Tamannah Bhatia plays the antagonist in the film. Produced by Sreshth Movies, Mahati Swara Sagar has composed the album.  SR Shekhar is the editor  and Sahi Suresh is the art director.

Nithiin, Tamannah Bhatia and Nabha Natesh starrer Maestro will premiere on Disney + Hotstar. The makers are yet to announce its release date.