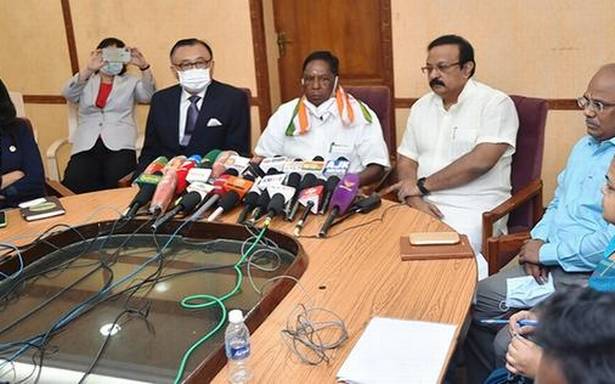 A delegation representing the Taiwanese government on Friday held discussions with Chief Minister V. Narayanasamy, Minister for Industries M.O.H.F. Shahjahan and senior officials at the Assembly to explore possibilities of setting up industrial units in Puducherry.

Shortly after holding discussions with the delegation at the Assembly, Mr. Narayanasamy told the media that the delegation had expressed a desire to invest in the industrial development of Union Territory, after the briefing by the government.

The government briefed the delegation about the present industrial climate, availability of land and other features of the Union Territory, the Chief Minister said.

“The delegation agreed to get back to the government with a proposal for investment. We have informed them about ready availability of land in the Karaikal region,” he said.

Ben Wang, Director-General of the Taipei Economic and Cultural Centre in Chennai, who led the delegation, said the talks were very “fruitful” and “meaningful.”

“India is still a favourable investment destination for Taiwanese business community despite the violence at the Winstron Corporation in Karnataka. We have come to know about the good industrial climate in Puducherry. It has got quality labour and close proximity to Chennai,” he said.

Mr. Wang said he had extended an invitation to the Chief Minister to visit his country post-pandemic to pave the way for further bilateral cooperation.

02/05/2021 India Comments Off on Taiwan ready to invest in Puducherry: Narayanasamy
TV & Movies