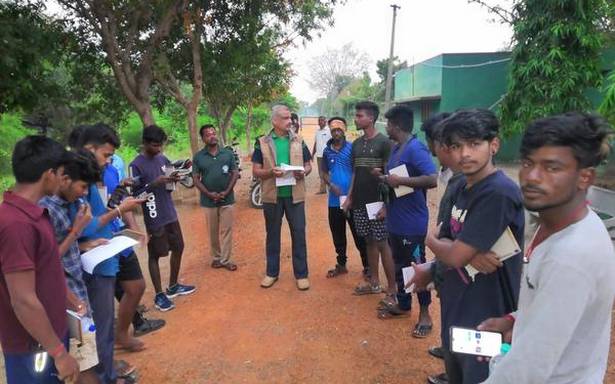 The enumerators were briefed about the methodology of counting birds, including migratory birds, at an induction programme before the census.

A two-day synchronised bird census began in all bird and wildlife sanctuaries in the central region on February 17.

Wildlife and bird sanctuaries at Point Calimere on the east coast near Vedaranyam, Vaduvur and Vijayamarthandapuram in Tiruvarur district, Karaivetti in Ariyalur district were among those protected areas in Tiruchi zone, where the bird census is being undertaken.

More than 200 persons are engaged in the annual exercise, jointly organised by the Forest Department and the Biodiversity Conservation Foundation (BCF-India). Bird watchers, ornithologists, wildlife enthusiasts and college students were among those roped in to carry out the census.

The enumerators were briefed about the methodology of counting birds, including migratory birds, at an induction programme before the census.

S. Ramasubramanian, Chief Conservator of Forests, Tiruchi, told The Hindu that the main aim of the synchronised census was to avoid duplication of the data and to document the birds in the entire state. The census would also help in understanding the migratory pattern of the bird and their nesting behaviour.

He said that the book ‘Birds in Protected areas of Tamil Nadu State’, which had complete details on the annual census programme conducted during 2018-2020, had been used as a benchmark database to record domestic, land and migratory birds. The book provided an insight about the various land and water birds species recorded across the State. It would also serve as a field guide for the bird watchers in identifying the birds found across the sanctuaries, Mr. Ramasubramanian added.

The synchronised census had been undertaken in all 13 wildlife and bird sanctuaries in the State. Of them, four were in Tiruchi zone.

A. Kumaraguru, Conservation Scientist, Biodiversity Conservation Foundation, said that enumerators were asked to submit their field data by Feb. 18 evening. After checking and cross checking, the data, a final report would be compiled by Saturday. It would enable the Forest Department to initiate conversation initiatives.