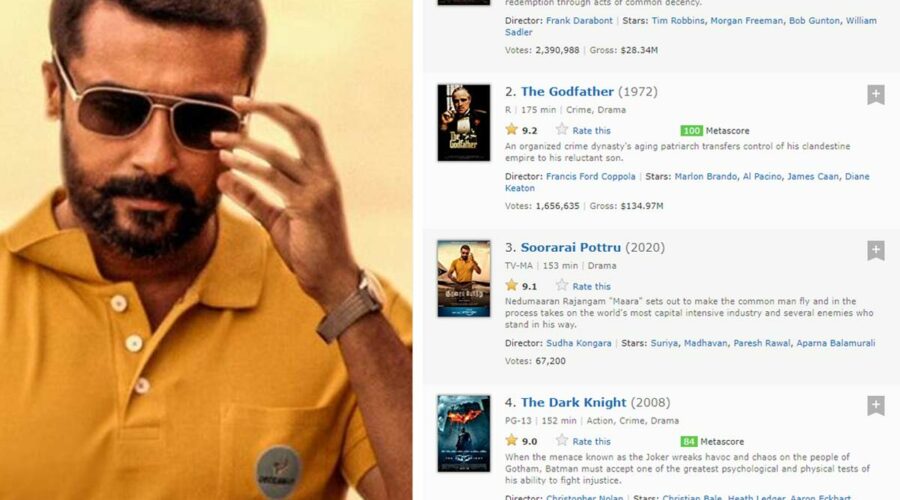 Kollywood actor Suriya starrer Soorarai Pottru, written and directed by Sudha Kongara, has set a world record as it has become the third highest-rated film on IMDb. Apart from Suriya, the film also has Paresh Rawal, Aparna Balamurali, Urvashi, Mohan Babu and Karunas in the supporting roles. Currently Soorarai Pottru rates 9.1 on the site IMDb.

Soorarai Pottru  was released on 12th November 2020, and it is based on the life of retired Army Captain G R Gopinath, the founder of low cost airline Air Deccan and  Suriya starrer follows Nedumaaran Rajangam, aka Maara on his journey to achieve his goals.

Suriya starrer Soorarai Pottru has featured in IMDb’s top 1000 movies and scores a 9.1 rating after the movies ‘Shawshank Redemption’ and ‘Godfather’.

Soorarai Pottru   was the only Indian film amongst the 366 films – eligible for a Best Picture nomination at Oscars 2021 and recently it  was also selected for the prestigious Shanghai Film Festival.

Earlier during an interview, Suriya had said, “All of my earlier characters are reel. But this character, is about a guy who has lived his life, and he  is a very humble man. He is a real life hero, who had a dream to make it big, and he did it.”