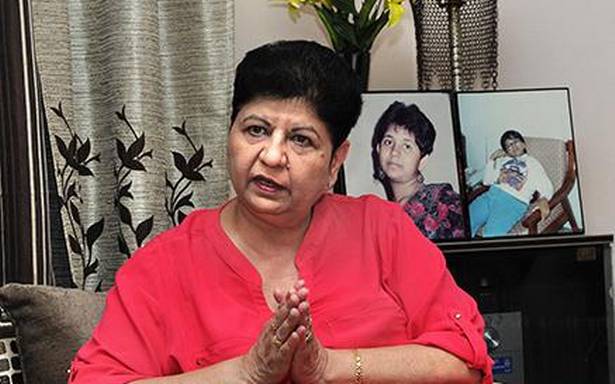 ‘Laws exist only on paper; there is a need for a different level of empathy when it comes to fire tragedies’

Neelam Krishnamoorthy, convener of the Association of Victims of Uphaar Tragedy (AVUT), believes India lacks both a culture of fire safety and social empathy for victims of fire tragedies. Ms. Krishnamoorthy lost her two teenaged children in the Uphaar cinema fire tragedy in 1997 that claimed 59 lives. Since then, the AVUT has been fighting for justice for the victims of the tragedy, and for improvements in fire laws and regulations in the country.

There has been another fire tragedy, this time, at a coaching institute in Surat. Why, in your view, do such instances keep recurring at public spaces across the country?

No lessons seem to have been learnt from the Uphaar fire tragedy. What has changed in the last 22 years on the ground (since Uphaar)? Construction and fire safety laws exist in India but, seemingly, only on paper. The nexus between the builder mafia, the owners and occupiers of buildings and government officials continues on the one hand and justice continues to remain a luxury available only to the rich, the powerful and the corrupt; that is why such tragedies keep happening time and again. There is a lack not only of a culture of fire safety — people do not even bother with commonsensical things such as creating multiple exits and buying reasonably priced fire extinguishers and alarms for buildings — in addition to lack of public sensitivity to fire tragedies in the country.

Do you mean by lack of public sensitivity in general viz. social apathy or to fire tragedies in particular?

I believe there is a need for a different level of empathy when it comes to fire tragedies. Yesterday, for instance, I had to make several phone calls to request people to not share the pictures and videos related to the incident. No one realises that these are going to haunt the families and next of kin of the victims for the rest of their lives. Instead of taking pictures and making videos bystanders could have helped the ill-equipped local fire department rescue and save the young lives which have been snuffed out. Something like this would have never happened anywhere abroad. We must be more empathetic as a people because governments, clearly, are not and always have the means to escape the blame due to them.

What ‘escape route’ do governments take when it comes to such incidents?

In a country where, according to National Crime Records Bureau (NCRB) statistics, around 62 people die in fire incidents each day, not only have successive governments viewed them as mere statistics, they insist on putting price tags on these lives. A fire tragedy consumes people and politicians announce compensation for them; back in 1997 (the year the Uphaar incident occurred) it was ₹50,000 now it is ₹4 lakh. Why don’t they use this money to equip their fire departments better instead? In Surat, apparently the fire fighters didn’t even have safety nets. The ball goes into the court of the judiciary and the people forget; there is no outrage when it comes to fire tragedies like there was after cases such as Nirbhaya or the 26/11 attacks. Lives are lives no matter how they are lost.

Is the recurrence of such incidents largely a symptom of corruption at lower rungs of government departments? Or are there larger issues at play?

Corruption and the nexus which I have mentioned, which cannot exist without political patronage at some level or the other are definitely problematic; but the biggest issue when it comes to fire tragedies and man-made disasters is lack of adequate deterrence. You pay some bribes and build more floors than you are allowed to, pack them with unsuspecting citizens who lose their lives and then argue in court that only Section 304 A of the IPC (causing death by negligence), which is bailable, is applicable in this case. I have been pursuing, since 2009, the possibility of a law governing man made disasters with a compulsory jail term of ten years but have not gotten the support needed to make it a reality. Just give me one example where conviction has taken place after a fire tragedy and the accused is not out on bail soon after.