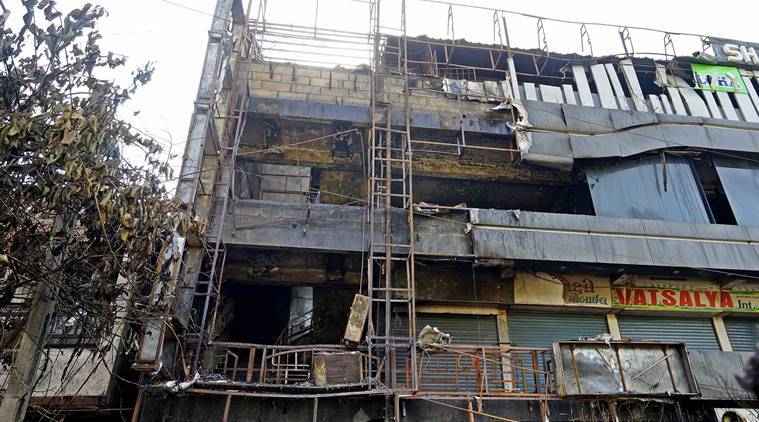 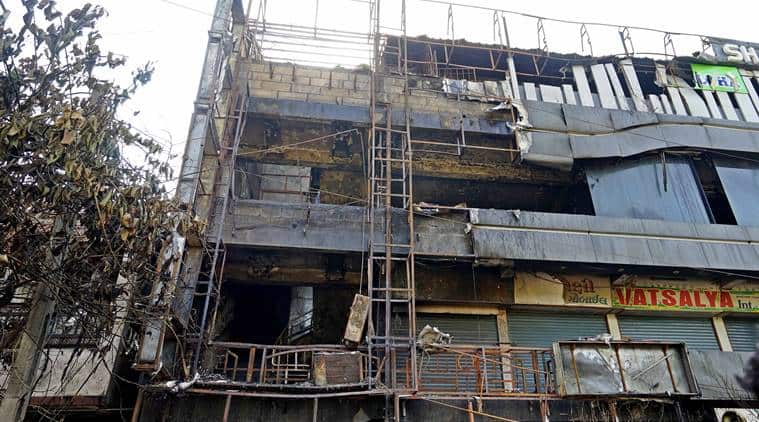 The casualty in the fire accident at Takshashila complex in Surat last week could have been less had the second exit staircase of the four-storeyed building not been blocked, according to the preliminary inquiry report prepapred by Principal Secretary (Urban Development Department) Mukesh Puri.

The Friday’s fire at a coaching institute located on the top floor of the commercial complex in Sarthana area of Surat left 22 dead, including 18 girls, and over 30 others injured. Many had died after they jumped off from the building to escape the fire.

In his preliminary inquiry report, which was submitted to Chief Minister Vijay Rupani here on Monday, Puri has recorded many such loopholes and lapses while recommending a number of policy initiatives.

Addressing mediapersons after submitting the report, Puri said that the primary reason behind the fire seems to be a spark in an outer unit of an air conditioner that led to an electronic advertisement display unit and highly combustible flex banners over it catching fire, thereby making the blaze quickly reach the third and fourth floors. Puri, though, added that the exact reason behind the fire was under investigation by forensic and power company officials.

“Main reason for such big number of deaths was that the building had a second, 5-ft-wide, RCC staircase. However, it was blocked…In short, whoever blocked that staircase, he/she has committed a criminal act. Had it (the second staircase) been there (opened), if not all, most deaths could have been saved,” Puri said.

Puri also stated that the mezzanine floor or the fourth floor where some creative classes were on, was only seven feet high, and therefore designer tyres, which can catch fire very quickly, were used for sitting instead of chairs. Also, there was no ventilation.

“The lapse in approval is evident…It will be probed if when was this mezzanaine (fourth) floor was constructed,” he said.

According to Puri, Surat Municipal Corporation (SMC) has, on Sunday night, lodged a criminal complaint with police for false declaration against responsible persons. A deputy engineer of Town Planning Department of the civic body has been suspended in this regard. Veenu Parmar was in charge of Varachha zone in 2015 when the SMC had given certificate of regularisation to Takshashila Complex for the illegal construction of the fourth floor.

Sources in the SMC said during the investigation it was found the owners of Takshashila Complex had applied for the regularistaion of third floor in 2013. However by 2015, when the application was approved, they had illegally constructed the dome structure on the roof, where the coaching institute was located.

Sources said that Parmar as deputy engineer of the zone had to visit the spot personally and based on his report the certificate was to be issued.

Puri also recorded another lapse last Novemeber when SMC had ordered to survey of buildings where children go after a fire accident that left two persons — a student and a teacher — dead. However, the Takshashila Complex was not covered under that survey. “It is a matter of investigation if, how come this building was not covered under that survey. In my report, I have indicated the responsibility of a fire official who was assigned the task of survey,” Puri said.

SMC had suspended Deputy Chief Fire Officer S K Acharya and Fire Officer Kirti Modh. The two officials have been suspended for not checking the classes at Takshashila complex in the crackdown in which a total 914 properties were surveyed and 440 buildings were asked to comply with safety norms, whereas, 39 buildings were sealed.

Puri has also recommended remedial steps to preempt such an event in future. The most important among them is to prepare a Negative List of buildings depending on its usage. “All buildings, even those which do not require permission will be inspected (to check their preparedness for fire).” he said.

Meanwhile, the two owners of Takshashila Complex — Vekarya Hasmukh and Jignesh Pagdara — were remanded in police custody for two days.