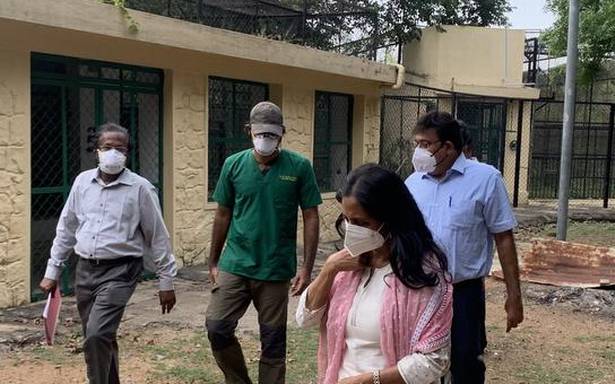 Supriya Sahu, Secretary, Environment and Forests, Tamil Nadu, visited the Arignar Anna Zoological Park at Vandalur on Friday, a tweet on her timeline said. She interacted with vets and officers and reviewed the treatment protocol being administered to the lions at the zoo.

Last week, a lioness died and nine others tested positive for COVID-19 at the zoo. A press release from the zoo said of the samples from three lions and four tigers sent to the Indian Veterinary Research Institute, Bareilly, for testing, two samples of lions were mildly positive (low level infection) for canine distemper virus (CDV). The remaining five samples tested negative for CDV and other pathogens. The samples are being tested for SARS CoV-2 and other secondary pathogens, the release said.

In a separate tweet, Ms. Sahu said two chimpanzees, Gombe and Gowri had become proud parents of a baby on Wednesday.

Gombe, aged 28, and Gowri (Susie), aged 23, are one of the major attractionsat the Vandalur zoo.

On Wednesday, Gowri gave birth to a baby chimpanzee. The mother and child are healthy and are under the continuous monitoring of the veterinary team.

The primates are active during the day, searching for food and feed, according to a press release from the Deputy Director of the zoo.

Chimpanzees are an endangered species, endemic to the African continent. In 2015, a 52-year-old female chimpanzee, Tun Tun, died at the zoo. It was brought from the Alipore Zoological Garden in Kolkatta as part of an animal exchange programme in 1998.