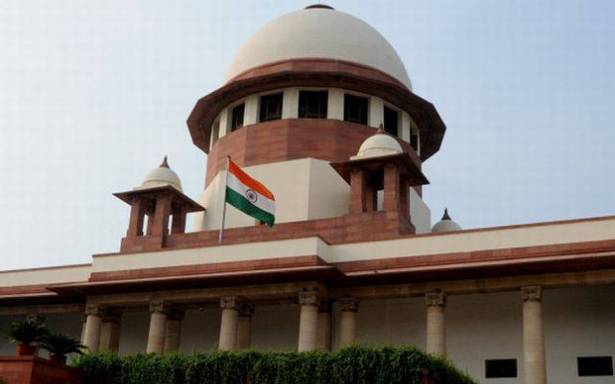 A Bench comprising Justices L Nageswara Rao and Vineet Saran took note of the submission of Solicitor General Tushar Mehta that the Centre’s reply was ready and will be filed.

The Supreme Court April 5 said it would hear on April 16 the PIL challenging retrospective change in the 2018 appointment order of Sanjay Kumar Mishra as Director of Enforcement Directorate (ED) that resulted in extending his tenure from two to three years.

A Bench comprising Justices L Nageswara Rao and Vineet Saran took note of the submission of Solicitor General Tushar Mehta that the Centre’s reply was ready and will be filed.

In the proceedings conducted through video conferencing, the Bench agreed to the plea of the Law officer for grant of some time and fixed the case for hearing on April 16.

During brief hearing, Mr. Mehta apparently took a dig at activist lawyer Prashant Bhushan who was appearing for petitioner NGO ‘Common Cause”.

“Your majesty is being taken for granted by such public spirited people,” the law officer said.

“Let them abuse me but we will show how this association (NGO) had filed cases which led to so many orders,” Mr. Bhushan said.

The Bench has posted the case of hearing on Friday next week.

The apex court on February 15 had sought responses from the Centre, the Central Vigilance Commission (CVC) on the PIL.

Mr. Bhushan said Mr. Mishra could not have been given any extension since he reached the age of 60 years in May 2020 and such an illegal extension may have an impact of “destroying” the independence of the office of the Director.

Besides seeking quashing of the Office Order of November 13, 2020 by which the appointment letter of Mr. Mishra was amended, the NGO has also sought a direction to the Union Finance Ministry “to appoint a Director, Enforcement Directorate in a transparent manner and strictly in accordance with the mandate of Section 25 of the Central Vigilance Commission Act, 2003”.

The NGO had moved the apex court just after the government had decided to amend the 2018 order and grant the extension of service of one more year to Mr. Mishra.

Referring to the CVC Act, the plea said the statute provides that no person below the rank of Additional Secretary to the Government of India shall be eligible for appointment as a Director of Enforcement and “the Director of Enforcement shall continue to hold office for a period of not less than two years from the date on which he assumes office”.

“The impugned Office Order issued by the Respondent No.1 [Centre] is in the teeth of Section 25 of the CVC Act as the said Section provides that a person has to be above the rank of Additional Secretary to the Government of India to be eligible for appointment as a Director of Enforcement.

“Thus, as the Respondent No.2 (Mishra) has already reached his retirement age in May 2020, therefore, after the end of Mishra’s two-year period on November 19, 2020, the Respondent No.2, by virtue of not holding any post above the rank of Additional Secretary, would have been ineligible for appointment as a Director of Enforcement again,” the plea said.

It alleged the government “employed a circuitous route” to ensure that Mr. Mishra gets one more year as ED’s Director by way of retrospectively modifying the appointment order itself.

“Thus, what could not have been done directly under the Statute has been done indirectly by the Respondent No.1 herein,” it said, adding that the action was against the principle enunciated by the apex court in its judgements.

Transparency is an integral facet of Articles 19 and 21 of the Constitution and in the decision-making process for the appointment of a person to the sensitive post of Director of ED, the plea said.

“Deliberations and reasoning of the CVC Committee [referred to in Section 25(a) of the CVC Act] in recommending a person to be appointed as the Director of Enforcement, should be made available in public domain,” it said.

The petition contended that the ED handles a large number of cases involving huge corruption, many of which are politically sensitive in nature, and the agency’s director has powers akin to that of the director of the Central Bureau of Investigation (CBI).

It added that “such illegalities in the appointment of the Director of Enforcement will shake the confidence of citizens in the institution of Enforcement Directorate”.

“Such an action will be totally against the laudable principles highlighting the need of impeccable integrity of persons holding high public offices and the consequent need for insulating the said offices from extraneous influences, as enshrined by the Supreme Court…,” it said.